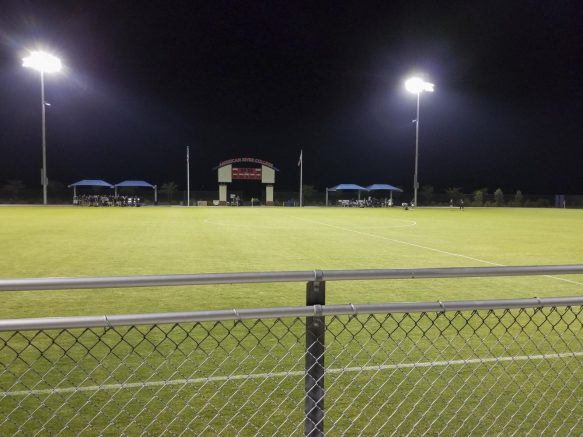 The soccer field at American River College during halftime on Sept. 15. (Photo by Hannah Yates)

While the Beavers were able to fend off any more goals, they were only able to score once themselves.

ARC forward Savannah Tijerino-Santos made her fourth goal of the season about 59 minutes into the game after being assisted by midfielder Alicia Lutsuk.

Tensions were high as increased falls and collisions marked the last half hour, and eventually resulted in two yellow caution cards for ARC.

Yellow cards are used as warnings for players. Any player that receives two yellow cards will be sent off of the pitch and the team will be down one player for the remainder of the game.

ARC goalkeeper Cassandra Figueroa saved seven of Folsom’s 12 shots, bringing her up to 29 saves on the season. The last few moments of the game the Beavers pushed hard and had a close shot at the goal, which would have brought the score to a tie.

The Beavers will have a chance to restart their win streak when they play at Sierra College on Tuesday.