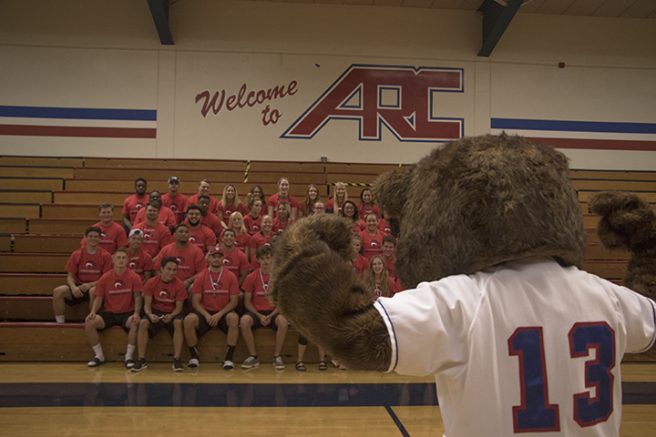 Bucky the Beaver poses in front of the student athletes who received a GPA of 4.0 at American River College during an athletic preview event on Aug. 25, 2017. (Photo by Luis Gael Jimenez)

American River College’s athletic department held a season preview where it honored student athletes with 4.0 GPAs, congratulated the reigning Northern California football champion Beavers and encouraged all athletes to approach school with the same tenacity that they do with sports.

The ceremony was led by student personnel assistant Olga Prizhbilov on Friday Aug. 25 inside the main gymnasium. 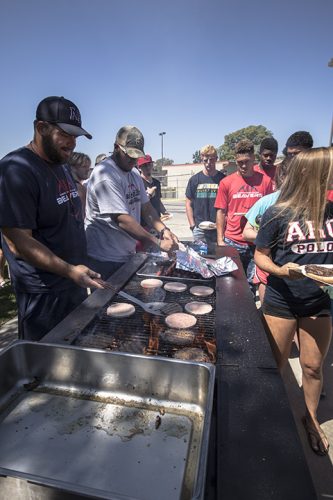 The festivities began with a hula hoop-themed challenge where different representatives from each sport linked arms and tried to pass a hula hoop through a line of people without letting go of one another’s arms while the college’s mascot Bucky the Beaver, cheered them on.

Prizhbilov also praised ARC’s student athletes for their continued academic success. “Not many community colleges can compete with us [academically],” Prizhbilov said.

All student athletes who had 4.0 GPAs were then presented with honorary medals.

Prizhiblov then went on to introduce counselor Robert Quintero. “This man inspired me and I hope he can inspire you in the same way,” Prizhiblov said.

Quintero urged students to be aware of the impact that sports can have on one’s body and to not forget the importance of school.

“In sports we never know what’s going to happen… [but] no one can ever take away your education,” Quintero said.

Quintero went on to once again reiterate just how important education should be to student athletes.

“Every single one of you has the ability to be an excellent student. That’s why you’re a ‘student’ before ‘athlete,’” Quintero said.

DA will not file rape charge in sextortion case