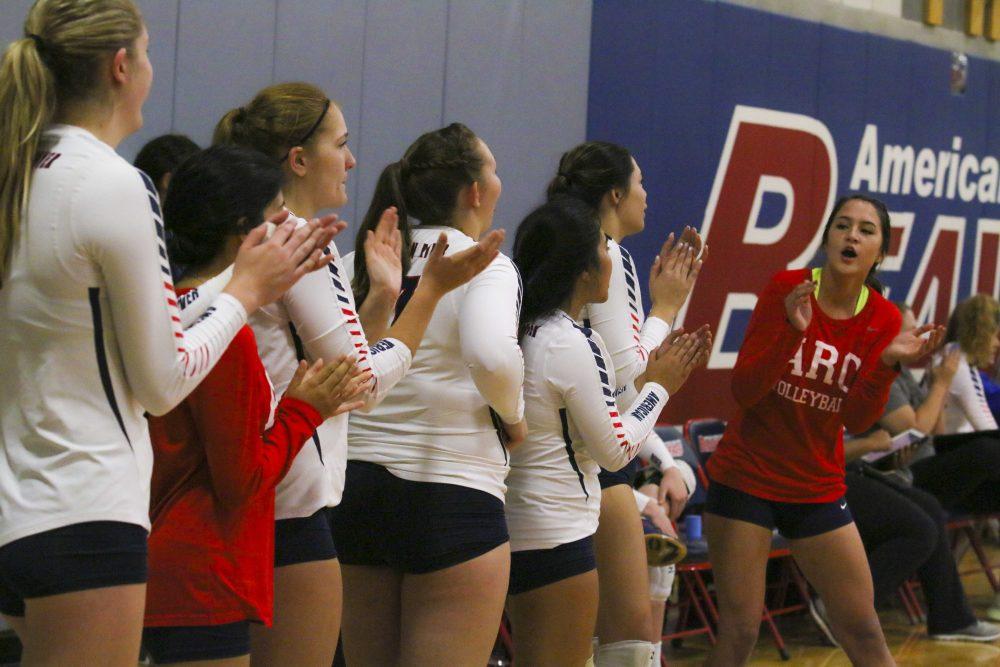 Freshman Kylie Villarreal gets ready to call out a chant to her teammates during the Volleyball game against MJC on Sep. 28. (Photo by Laodicea Broadway)

“It was a team who we had an opportunity to take care of business against, and we did that,” said coach Carson Lowden.

Outside hitter Kaitlin Meyer made a couple of blocks at the net and made a cross court spike that helped put the Beavers up early in the first set.

“We played kinda down which isn’t normally like us,” Meyer said. “But we picked it back up and came through.”

The first set ended with a long volley that was dominated by the front three of ARC, Dani Schoen, Kylie Villarreal and Erin Fogarty.

The second set required a little more focus from the Beavers as Modesto regrouped and was able to contest ARC’s front line.

“We, in that second set … we were making some unforced errors that we weren’t making in the first set,” Lowden said.

The second set stayed close throughout even after Madison Hunziker sent a powerful spike to center court that the Pirates couldn’t get a hand on to put the Beavers up 16-12.

With the second set tight at 24-23, the Beavers took the game by a final serve by Mary June Ubag that landed front open court that no Pirate player could get to.

Defensive specialist Emily Dzubak was all over the court keeping the ball in play and setting up key shots for the Beavers (up front) playing the net.

The Beavers came out to a quick 9-2 lead in the third set before the Pirates called a timeout.

After the timeout Modesto made an effort to comeback as the score got close at 20-17.

Still, the Beavers were able to continue to take their time and set up strong shots against Modesto. ARC won the set 25-18 with a final cross-court spike by Schoen.

After the game, Schoen felt that the team played well together, that they have been working hard at practice and expected a victory tonight.

“I was confident in our play and our ability,” Schoen said. “We didn’t play down to there level, we did our game.”

The volleyball team plays their next match at Sierra College on Oct. 8.