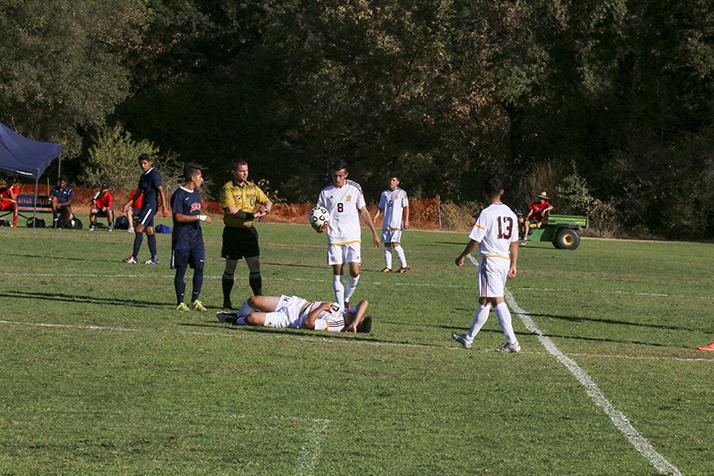 Hartnell College midfielder Patricio Nolasco lies on the field while other players talk with the referee during a soccer game against American River College on Sept. 20. ARC lost 4-0. (Photo by John Ennis)

The American River College’s soccer team held a home game on the old field and took a loss causing their home record to drop to 2-2 after a defeat to Hartnell College on Tuesday.

Coach Paul Hansen has led the ARC soccer team for 20-plus years and said before the game that he “has very high expectations for this team being a playoff contender.“

Hansen pointed to his team captain and midfielder as standout players to watch.

“The two players to watch are team captain, forward Gio Vazques and midfielder Julio Herrera. They are lead by example players and realistically my whole team is packed with talent,” Hansen said.

Vazquez tried to help his team by moving the ball deep into the opponent’s side of the field to no avail as the Beavers were unable to solve the defensive puzzle and were handed their fourth defeat, leaving their record at 4-4-1 on the season.

Herrera showed some great footwork beating as many as three defenders to position himself for a shot on goal. Unfortunately,  his shot went high and was unable to capitalize on what would be one of few opportunities the Beavers would see.

The Beavers made attempts to execute and showed their ability to work solid as a team with consistent passing the ball and the communication between the players on the team.

ARC’s defense kept the pressure on their opponents consistently causing them rushed shots on goal and forcing several offside penalties against Hartnell.

Hartnell jumped out to a 1-0 lead only 15 minutes into play with a goal by Leo Montellano. This would set the stage for things to come as ARC would not fend off the offensive attack of Hartnell.

The second half did not get any better for the Beavers as Benito Chavez and Wily Miranda each added goals in the span of 20 minutes to extend Hartnell’s lead to 4-0.

With the new stadium due to open soon, and hopes for a championship game to be hosted in it, Hansen feels there is plenty of reason for optimism and justifiable high expectations for the talent on this ARC soccer team.

ARC’s next game will be away at Cosumnes River College on Sept. 23 and it will be their first conference game of the season. Their next home game is on Oct. 11 when they welcome Santa Rosa Junior College.