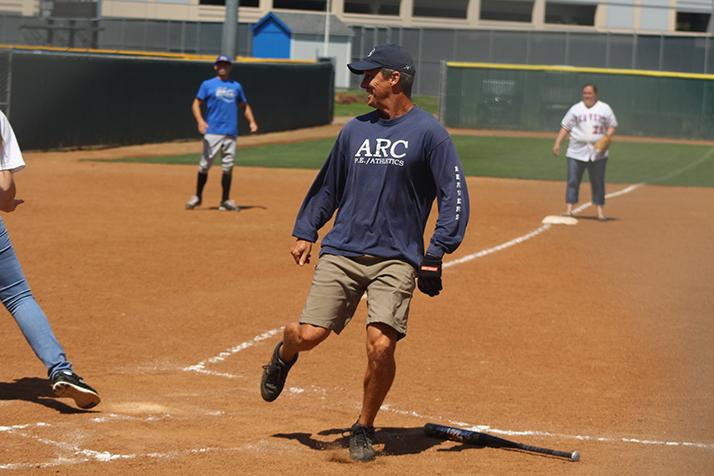 Men's track and field head coach and Faculty player Rick Anderson looks back after scoring a run during the Classified vs. Faculty softball game on April 29, 2016 at ARC. Faculty won the game 24-9. (Photo by Mack Ervin III)

The Faculty vs. Classified softball game ended with a blowout victory for the faculty team, winning by the score of 24-9.

The game was played with modified rules since they had permission to use the field for only an hour.

Some of the rule changes included five pitches per batter instead of counting strikes and balls, every home run after the first instance, counted as an out, and each team providing pitchers to toss balls to their batters.

The faculty team wore blue clothes while the classified team went all out with jerseys and numbers for the game.

Their preparation in fashion didn’t translate to performance on the field as they were blown out by the faculty team’s multiple home run innings. Eventually the teams stopped keeping score at one point.

Several staff members were in attendance for the game including school president Thomas Greene.

“I’m not classified or faculty, but I’m pulling for whichever team is behind,” Greene said. “I’m dressed to play if I wanted to.”