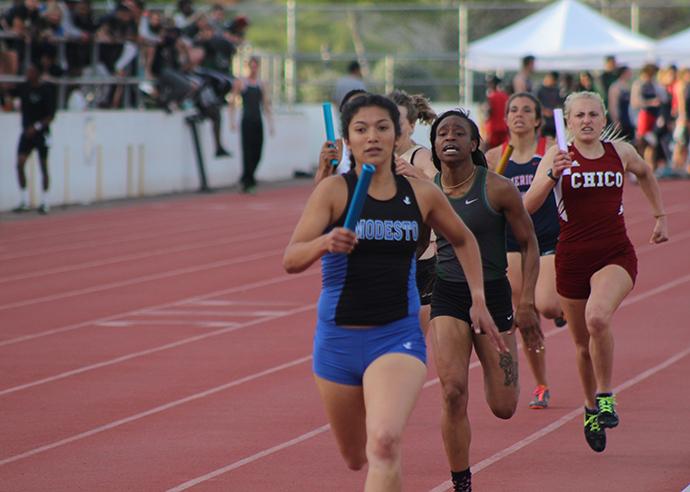 Modesto Junior College runner Mariajose Correa leads the pack during the 2nd leg of the women's 4x400m relay race at the American River Invitational on March 26, 2016 at American River College. Correa and the Modesto team finished 3rd with a time of 4:00.84. (Photo by Mack Ervin III)

After the Beaver Relays at ARC were disrupted by weather and a schedule change, the American River Invitational was run at full capacity and under clear skies.

This meet featured upwards of 20 schools in attendance, as well as unattached athletes, which meant that every event was pretty competitive.

Cambron Lyles won the pole vault event, clearing the bar at a personal best of 4.82m.

For the women, Stevie Jones and Jessica Swingle won their heat races for the 200m and 800m respectively, Micayla Rennick finished second in the 1500m and the 4x400m relay team finished in second overall.

Women’s head coach Jeanette Allred-Powless said that they “were blessed with very good weather” and “had a lot of good marks.”

Men’s coach Rick Anderson agreed and added that the position of the parking garage was beneficial to the wind factor.

Swingle said that the team performed admirably in the meet and that they had accomplished a lot.

“I think we did pretty well. A lot of people (reached new personal records) so that’s good,” Swingle said.

Hassen (Ozzie) Hassen, who raced in the 800m dash and the 1500m run, said that he uses the shorter runs to practice for the long races.

Hassen also said that while racing at home is better most of the time, it doesn’t impact his motivation to run faster.

“Everywhere we go, we want to get a big PR (personal record) and race faster. It doesn’t matter if it’s a home meet or outside,” Hassen said.

Allred-Powless said that being cheered on by people who support them is a big reason for home field advantage.

“They like to compete at home because (of) the home field advantage and get to have their family and friends cheer them on,” Allred-Powless said. “This year was nice because we had a lot of alumni come back to compete and support us.”

Anderson also highlighted defending NorCal champions College of the Sequoias as the main challenger for this year’s event.

“Last year we scored the most points we ever scored in that event and they ended up beating us by 5 points,” Anderson said. “This year it’s probably going to be the same and come down to the wire.”