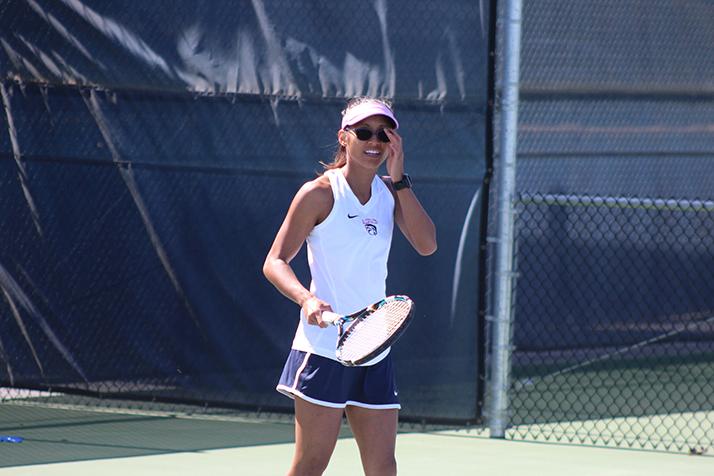 While doubles matches remain an achilles heel for the team, they appear to be closing the gap to the opposition in the singles matches.

Sophomore captain Addie Ramos picked up another individual win against Santa Rosa, while Katherine Bonilla made life very difficult for her opponent, taking their match into a second set tiebreak before ultimately losing.

Two individual wins have come from Ramos so far, and another was added by Nosheen Khan against Cosumnes River.

With the end of the season approaching, improvement and better play has become the rallying cry for the season.

Head coach Steven Dunmore acknowledged this and said that improvement is apparent compared to earlier games in the season.

“Overall, the team is learning to compete,” Dunmore said after the game against Santa Rosa. “We got our second individual win of the season and it’s starting to rub off. All of the matches are getting closer more often and the girls are learning how to compete.”

“That’s all I ask is that they go out and give me their best,” Dunmore said. “The score will take care of itself.”

Katherine Bonilla was also proud of the team and the amount of competitiveness the games have.

“You could see the improvement and confidence rise in everyone and my game was really close too,” Bonilla said.

Addie Ramos urged the team to keep supporting each other and to not give up in what may be tough times.

“Support goes a long way, and I think we’re learning that as we go along,” Ramos said. “We played with a lot more energy in doubles and we’re still looking for that first win.”

Ramos also said that it is important that the team show their love for the sport of tennis on the court as well as off.

“We talk about how much we love tennis and how it doesn’t really show on the court,” Ramos said. “The first step is really presenting themselves as if they want to be here.”