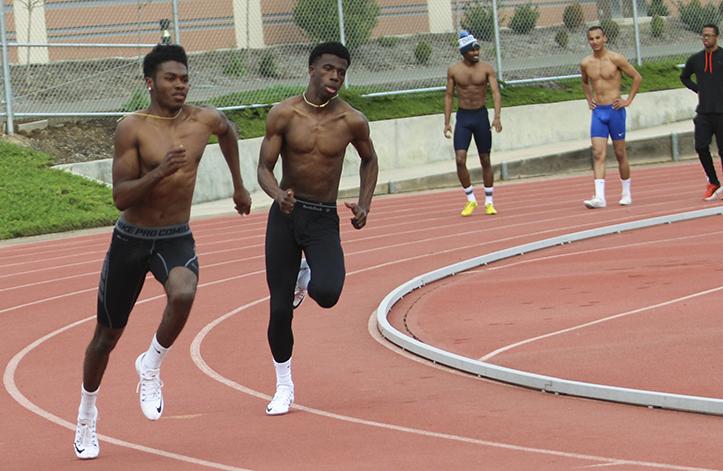 Isaiah Griffin (center left) runs during track and field practice on March 10, 2016 at the American River College Beavers stadium. Griffin has seriously progressed during his time at ARC to become one of the team's top sprinters. (Photo by Itzin Alpizar)

American River College sprinter Isaiah Griffin wasn’t always the fastest runner on the track, but his time at ARC has seen him steadily improve and become one of the top sprinters in both the school and the state.

Griffin started running at 17 years old when he was attending Yuba City High School, and ran what he considered to be average times before deciding to attend ARC last year.

Griffin didn’t let his progress distract him and noted that “he wasn’t always the fastest guy in the room.”

Men’s track and field coach Rick Anderson said that he saw a lot of improvement from Griffin during his time at ARC.

“Isaiah has improved massively and even more since high school with his times,” Anderson said. “He is one of the fastest runners on our team.”

Anderson believes Griffin “definitely has what it takes to continue running track professionally.”

Recently, Griffin finished first in the men’s 200 meter dash at the Beaver Relays on Mar. 4 and at the Coast Conference Preview on Feb. 20.

He was also a part of teams that finished first overall in both the 4×100 meter race and the 4×400 race at the Coast Conference Preview.

His time of 21.94s in the 200 meter dash places him second overall in the Big 8 conference for that particular race, and tied for 12th across all California community colleges.

“Track is not so much a passion but I do it because it’s really fun and keeps me in shape,” Griffin said.

Griffin will be graduating in May and has hopes of being recruited to further his running career, but as of now has no set school he is looking at.

Griffin runs the first leg on the men’s 4×4 relay team and runs the second leg on the 4×100 relay.

Griffin currently has nothing he is training for specifically, but is always working hard to improve on his times.

Fellow ARC runner Xavier Gaulman had praise for Griffin for his skills on the track, and his ability to inspire teammates.

“He (Griffin) is an excellent team player,” Gaulman said. “He works alongside all the sprinters, pushing them and himself to their fullest potential.”

“He motivates others to keep on racing even when they are tired and he’s a true sportsmanship athlete that has the skills to be a team captain,” Gaulman said.

Griffin and the team’s next track meet is the Hornet Invitational at Sacramento State, which takes place on Mar. 19.