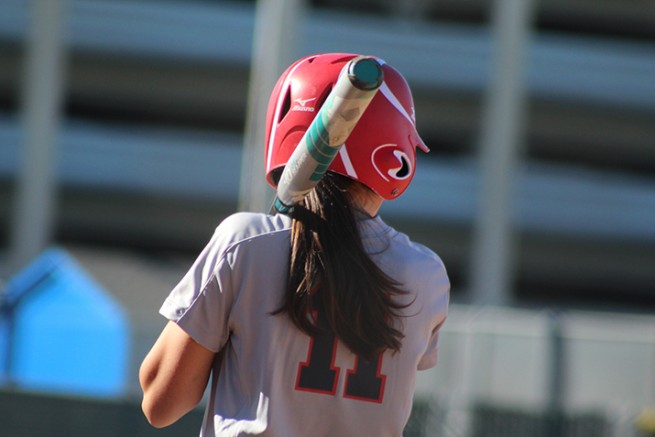 American River College outfielder Stephanie Scott warms up before stepping to the plate in a game against Napa Valley College on Mar. 1, 2016 at ARC. ARC won 7-3. (Photo by Mack Ervin III)

After a quick start to the game, where ARC scored four runs in the first two innings, the Beavers struggled to score in the middle innings despite consistently getting runners on base.

One of the bright spots of ARC’s early offensive game was infielder Sierra Cryderman, who scored a run and had an RBI with two doubles.

Cryderman said that she tried to work on handling the slower pace of Napa’s pitcher.

“I felt confident seeing the speed that she was throwing,” Cryderman said. “I know that our team really struggles sometimes waiting on the pitch, so I thought of it like coach just soft tossing it to me.”

Assistant coach Christina Mueller said that frustration was a main cause for the team’s bats slowing down.

“Our bats weren’t doing what we wanted them to do,” Mueller said. “We were hitting but we were hitting right to people so I think that put us on halt.”

Mueller added that, when the competition starts getting tougher, ARC needs to play its hardest from first to last pitch.

“We need to step it up because conference is coming up,” Muller said. “If we don’t turn it on earlier in the game, we’re going to get eaten up.” 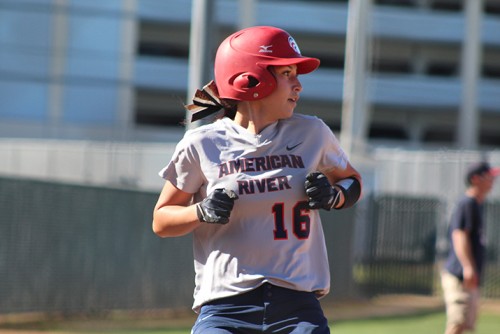 ARC broke away from Napa in the fifth inning when infielder Haley Dosher came in as a pinch-hitter and hit a three RBI double.

Dosher said that coming into the at-bat she put pressure on herself and had a “huge want” to hit.

“There was some pressure to get a hit because we can play better than how we were,” Dosher said. “It felt good hitting it.”

Mueller pointed out Dosher’s hit as the highlight of the game and said that there’s a lot of pressure for a pinch-hitter coming in late during a close game.

“Some athletes buckle in these situations and some thrive. She (Dosher) came in with energy and motivation and sent it to left field.” Mueller said. “She’s been hurt all week, so that was also really key.”

Dosher said that she has a strained hip flexor, but her health is “getting there” and she’ll be ready to go by the time conference play starts.

Pitcher Sharie Albert started the game on the mound, but after giving up three runs in the first two innings, she was replaced by Alexandra Pudlo before coming back out to close the game.

Albert said that she was able to settle down between her two appearances on the mound and finish off with more confidence.

“Softball is a big mental game and it can defeat you at times,” Albert said. “Going into that second half of pitching, I was more mentally focused.”

Looking toward the upcoming Big 8 conference games, Albert said that the team was ready to come out strong and outplay expectation.

“We’re getting ready for the Big 8,” Albert said. “We’re going to practice hard. We’re going to make adjustments and come into conference better than people expect.”

Dosher echoed Albert’s thoughts that there were adjustments that needed to be made and added that the team’s in-game attitude had been a problem so far this season.

ARC plays a doubleheader against Yuba College tomorrow and its first conference game is against Sacramento City College on March 12.