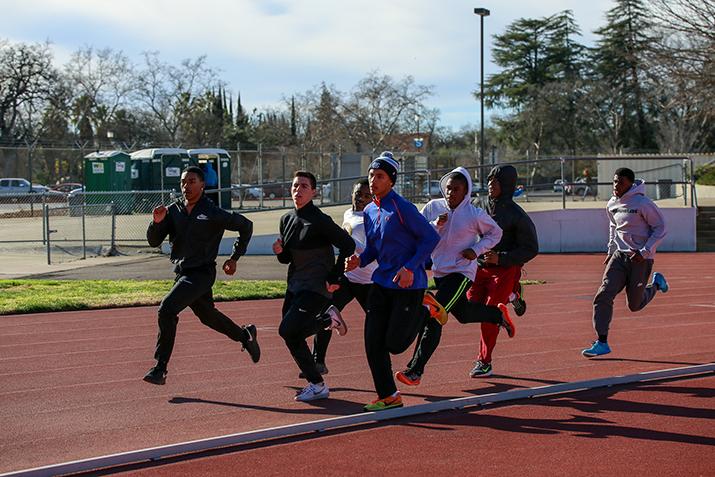 American River College men’s track and field team is looking to continue its success on the field by seeking its sixth straight Big 8 conference championship.

Head Coach Rick Anderson said that the team’s ultimate goals for this season is to bring home a treble of championships by winning conference, NorCal and State championships.

“We won it (the NorCal championships) four times in a row and then we took second last year,” Anderson said. “We scored the second most points we’ve ever scored last year and still came second.”

Anderson expressed pleasure at being able to utilize distance runners from the Cross Country team’s roster, who won its 10th straight conference championship in the fall.

“I’m not saying that it’s impossible to beat us, because someone can,” Anderson said. “But it’s really hard to beat us in the conference because we have so many distance guys who are gonna score points,”

Freshman runner Ross Walker, who was a part of this year’s state championship winning cross country team, is looking forward to the competition and the chance to compete on the college circuit.

Walker also stressed the importance of team bonding and supporting teammates in what many consider to be an individualistic sport.

“I think it’s still really important to work together and to keep motivating each other at practices and racing,” Walker said. “Track might be more focused on individual racing but it’s still good to have a strong connection with everyone, so we can all help each other.”

One area, that Anderson highlighted as a potential struggling point this season, is throwing.

“We only have a couple throwers, but we have a new coach so give it a year or two and we should be real good in those too,” Anderson said.

The new throwing coach, Mike Curry, founded and was the head coach of the Golden State Throwers, a company for high school throwers in the Northern California area. He is also a member of the coaching staff for Olympic gold medalist Stephanie Brown Trafton.

“We’re on a three year plan,” said Curry about the state of the team’s throwers. “We’ll work with the athletes we have here right now and in three years we should have a really good program.”

When asked about what drew him to ARC, Curry said that he enjoyed the atmosphere and the people of the campus.

The team begins its quest for its sixth straight Big 8 conference win at the MPC Open in Monterey on Feb. 20.