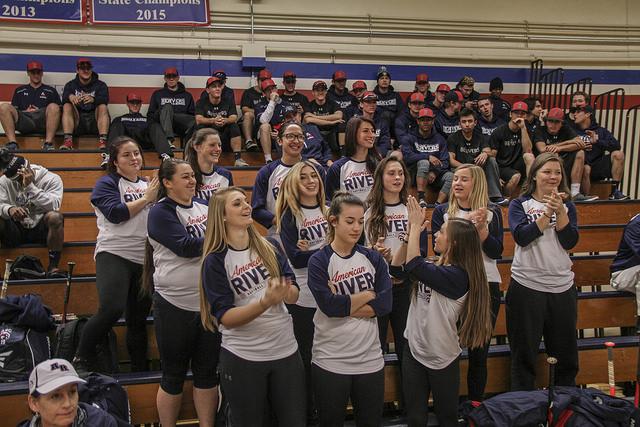 The rally included recognition of academic achievements for all student athletes who achieved a 3.0 GPA or better during the fall 2015 semester, as well as individual and team athletic honors.

Many coaches and players who attended said they enjoyed the first-time event.

“It’s a great function to get our student athletes together,” said women’s basketball head coach J.R. Matsunami. “It’s really important we recognize them as students first.”

Head baseball coach Doug Jumelet added that a similar idea would be good in the future and thought the event went smooth for a first attempt.

“It’s good to bring students together,” Jumelet said. “Sometimes they get so wrapped up in their own season, they don’t get to know each other.”

Michael Hatfield, a shortstop and outfielder for the baseball team, thought the event was nice in unifying the athletes of different teams together.

“It was good to get to know the teams, see everyone’s success,” Hatfield said. “On and off the court, field, pool, whatever.”

Fall sports teams were recognized one by one for athletic achievements, listing off individuals who made all-conference, NorCal and state level teams.

The men’s cross-country team, which won the 2015 state championship, came down from the bleachers for standout recognition.

The team then unveiled its championship banner in front of fellow ARC athletes.

“It was cool,” said cross-country runner Ross Walker. “It was great getting a lot of recognition.”

Walker added that he feels ARC has a good balance of focusing on academics and athletics, whereas some schools can excel at one but struggle with the other.

At least one athlete from every team was recognized for having a 3.0 GPA or above during the fall semester, and 10 were brought down from the bleachers and received medals from their coaches for achieving a 4.0 GPA during the fall.

“It definitely shows that coaches are emphasizing grades,” said men’s cross-country head coach Rick Anderson. “Hopefully those that weren’t up there say, ‘That’s the group I want to be in next year.’ ”

Spring teams were listed with short previews of expectations they have for the season.

Hatfield said he believes the baseball team can take the next step this season after falling just short of the playoffs in 2015.

“I think we have a lot of guys with college experience that can help bring us together,” Hatfield said. “We can definitely win the Big 8 (Conference) if we continue to strive and play as a team.”

Cody Duong, a member of the men’s tennis team, said the team “has a lot of depth” and that he was excited for the season.

A moment of silence was held for Hector Zavala, who played for the men’s soccer team and died on Jan. 8.