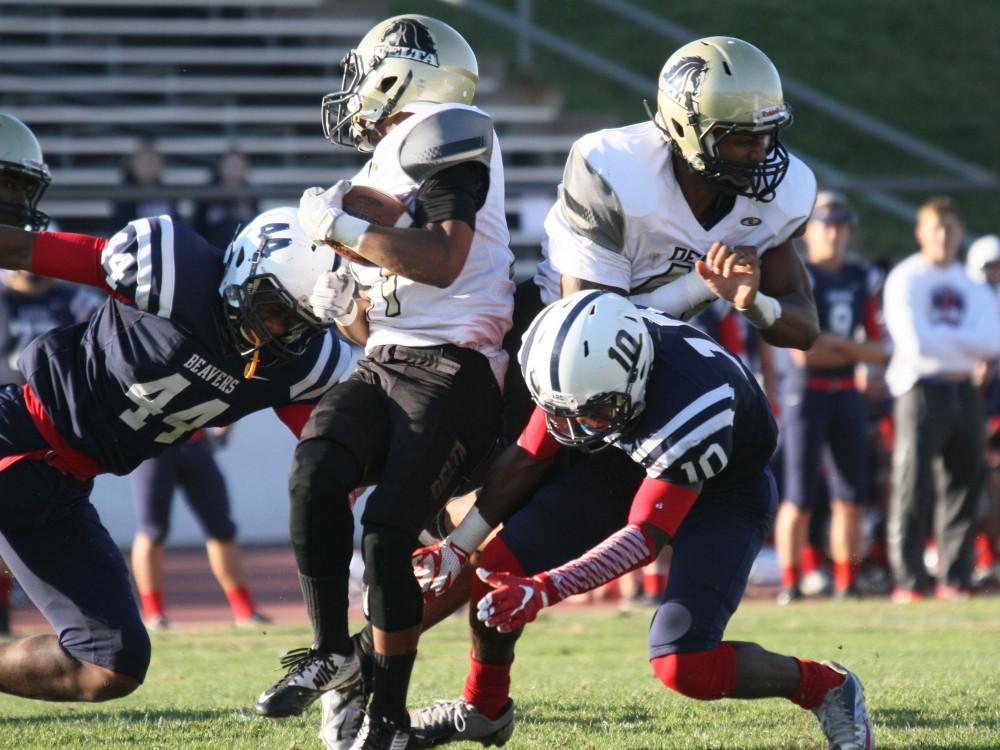 ARC wide receiver Malik Dumetz caught what he believed was a potential game-tying touchdown pass, a belief which multiple teammates agreed with despite the official ruling of an incomplete pass on fourth down.

Dumetz insisted that he caught the ball with one foot in bounds which would’ve rendered a completion and a touchdown to set up the game-tying extra point, but the referee ruled him out of the field of play entirely.

Dumetz said he was “angry” when asked to describe the feeling he had after seeing the official ruling.

Several players felt that they were unprepared and didn’t come out with the right mindset, and that no one person was to blame.

ARC running back Armand Shyne said the team was never in rhythm throughout the game.

“It wasn’t right,” said Shyne, who finished the game with only 16 yards on five carries. “Everything just didn’t seem right.”

ARC defeated Delta handily in a game on Sept. 19, a fact that Shyne said got in the team’s head to not prepare at the highest level.

“We felt like we already beat them,” Shyne said.

Shyne and ARC head coach Jon Osterhout both hinted at the unfulfilled preparation being the mindset not focused on the task at hand.

“Disappointment of not being where we think we should’ve been to end the season probably had something to do with it,” Osterhout said.

“Even the Butte game, I felt like we should’ve beat them. We’re better than them.”

ARC lost to Butte on Nov. 7 on a touchdown as time expired, a loss largely responsible for the team not making the playoffs.

Delta tied the game on a field goal in the final minute of the fourth quarter before needing just two plays in overtime to take the lead.

In the drive leading up to the field goal, Delta was the beneficiary of a pass interference call on fourth down that in all likelihood would’ve sealed the win for ARC, a call which Osterhout adamantly disagreed with.

“I think it’s a no call, in that situation, at that point in the game,” Osterhout said. “We didn’t make a play.”

ARC was also called for consecutive encroachment penalties on the drive, which set up the 31-yard game-tying kick.

“Good, hard-fought game, back and forth, but Delta College made one more play than we did,” Osterhout said.

“I’m the one in charge,” Osterhout said. “Ultimately, it falls on me. It solely rests on my shoulders, and I’m man enough to own that.”

Vercher and Dumetz both agreed with Shyne that the team didn’t come out ready to play the way it should’ve. Vercher took it a step further.

“I played a terrible game from start to finish,” Vercher said. “The whole first half is on me.”

Vercher finished the game 17-for-34 for 173 yards with a touchdown and an interception.

Backup quarterback Chris Guillen got nearly all the snaps in the second quarter and went 7-for-10 for 79 yards, but did throw a 33-yard touchdown pass to wide receiver Zack Suarez to tie the game before the break.

As the bowl game isn’t a playoff-level competition, it allowed both coaches to be more lenient in putting players in the game.

Despite the awful sensation many players said they felt following the game, they thought the team had a pretty good run throughout the season.

“It’s going to stick with me forever, because it’s hard to find a team like that, where everybody loves each other,” Vercher said on the camaraderie the players share.

Osterhout said he admired the way the team members carried themselves through the highs and lows of the season.

“I’m very proud of what they did over the course of the season,” Osterhout said. “I just don’t like the way we finished.”

Osterhout said that while adjustments need to be made, he believes the challenge can be met.