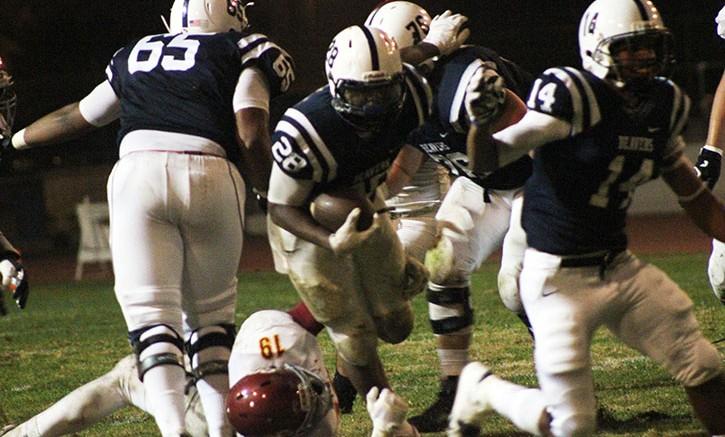 Running back Armand Shyne bursts through a wall of Sacramento City College defenders during ARC's 38-18 win. Shyne ran for two touchdowns with over 120 yards in the Nov. 14, 2015 win. (Photo by Nicholas Corey)

American River College’s offense erupted for 21 unanswered points in the third quarter of a 38-18 rout of Sacramento City College in the final regular season game.

Following the playoff committee vote Sunday morning, ARC will not compete in the playoffs but will still host San Joaquin Delta College in the Gridiron Classic Bowl this Saturday. ARC beat Delta early this season by a score of 44-24.

Head coach Jon Osterhout said prior to the vote taking place that “regardless of what happens, I’m really going to love playing another game with this football team.”

ARC running back Armand Shyne said that the team came into the second feeling like they “should’ve been blowing them out.”

“They shouldn’t be able to compete with us,” Shyne said. “We should have been playing tough and that’s what we did in the second half.” 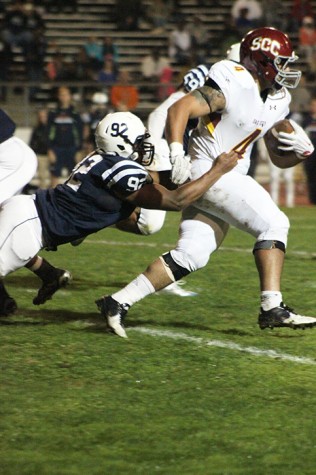 Defensive lineman Quincy Capel of American River College grabs at the jersey of Sacramento City College running back Leonard Skattebo in attempt to drag him to the turf. Capel had three tackles in ARC’s 38-18 win on Nov. 14, 2015. (Photo by Nicholas Corey)

Shyne finished the game with 119 yards rushed and two touchdowns on 26 attempts, as well as three catches for 27 yards.

Osterhout said that the team settled down after a first half in which ARC allowed Sac City to compete.

“We just knew, if we came in and made the proper adjustments, we’d really be able to showcase our ability to take over a football game,” Osterhout said. “I think the coaching staff and the players did a great job of (at halftime) making some key adjustments offensively and defensively and showed, at the end of the day, that our team is extremely hot right now.”

The game was ARC’s best offensive performance all season, as the team finished with 623 total yards, over 100 more than any other game this season.

Quarterback Jihad Vercher also had his best night of the season, throwing for 353 yards with two touchdowns on 22 of 34 completed passes and a touchdown run.

“We just had to start playing our game,” said Vercher. “(In the) first half we were a little hesitant; we weren’t communicating, so in the second-half we knew we just had to go out and do our thing and we did.”

ARC wide receiver Jonathan Lopez, who caught both of Vercher’s touchdown passes, said that his camaraderie with Vercher has led to on-field production throughout the season.

By the start of the third quarter, ARC led Sac City 35-11 and the majority of their offensive starters were done for the rest of the game.

Sac City scored its first of two touchdowns on an 8-yard run by running back Dwayne Darden in the second quarter following a fumble by ARC.

Sac City’s second and last touchdown came in the last 10 seconds of the game on a 24-yard pass from Sac City quarterback Taylor Laird to wide receiver Maceo Clinton.

Running back Ce’von Mitchell-Ford, who received the majority of the snaps at running back over the last five games, didn’t play a snap Saturday as he was recovering from a minor ankle contusion that he suffered during the Nov. 7 loss to Butte.

“They (the coaching staff) shut me out this game … just wanted to make sure I can play next game,” Mitchell-Ford said. “I’m feeling good, next week is not a problem.”

Opinion: Vaping shouldn’t be a part of the smoking ban