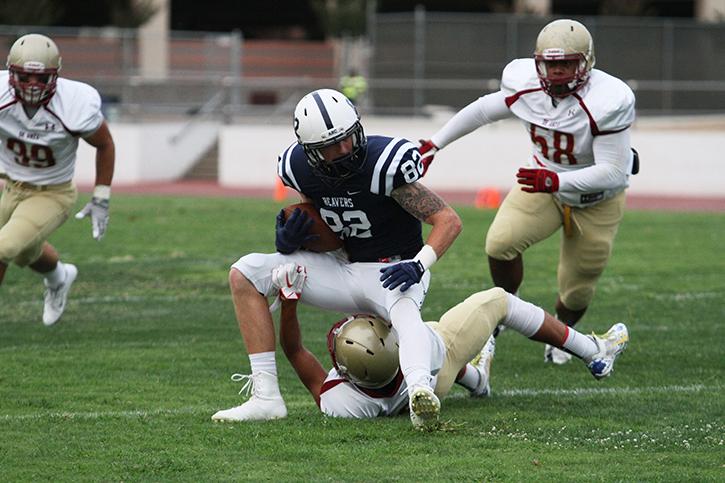 American River College wide receiver Jacob Sipes is brought down by De Anza defensive back Christian Rita during ARC’s 38-2 win over De Anza at the home opener on Sept. 12, 2015. ARC amassed 31 points in the first half alone. (Photo by Barbara Harvey)

After losing its opener at Modesto Junior College by 31, American River College’s football team stands at 1-1 after defeating De Anza College 38-2. It will now look to move above .500 Saturday at home as it plays 1-1 San Joaquin Delta College.

After getting blown out by MJC on the road opener, ARC was able to balance itself with a 38-2 win over De Anza College.

After rushing for just 26 yards on 30 carries one week ago, ARC ran for 189 yards on 39 carries, 131 of which came from running back Armand Shyne.

“The O-line played exceptional in regards to opening holes for De Anza. We put a lot on our O-line to carry our football program,” said ARC football head coach Jon Osterhout.

“It was one of those things where we had a good week of practice … these kids didn’t think they could practice at the level we are now,” said ARC offensive line coach Josh Crabtree.

ARC starting quarterback Jihad Vercher rebounded from a poor start against MJC where he threw one interception and one lost fumble by throwing for three touchdowns against De Anza College.

Vercher, a sophomore transfer from Sacramento State, has a 60 percent completion rate for the season and 460 yards, four touchdowns and one interception.

According to Vercher, last week’s loss against MJC helped to focus the team.

“It turned the switch on. It made us realize you’re not guaranteed anything. You got to earn everything,” he said.

These transfers have meant that many new starters have had to quickly settle into roles in ARC’s defense, which ranked 6th in the state last season, giving up just 19 points and 264 yards per game.

Freshman linebacker and captain Jordan Kunaszyk, who was a medical redshirt last season, has 23 tackles through the first two weeks, which ranks third in the state, and a sack.

“We lost a lot of sophomores. We lost a few defensive starters due to academics, and one injury. It’s a new team,” said Kunaszyk after ARC’s 41-10 loss at MJC.

After two weeks, ARC’s defense is ranked in the middle of the pack at 28th in the state out of 69 teams, giving opponents averages of 306 yards and 21.5 points per game.