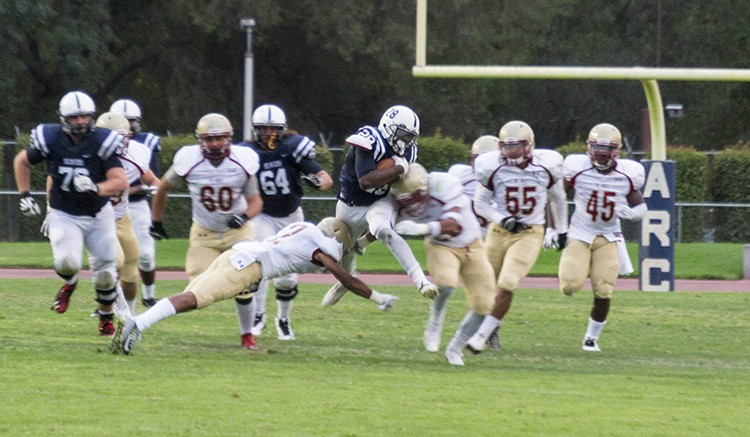 American River College’s football team rebounded from last week’s loss to win 38-2 in a game in which quarterback Jihad Vercher threw for three touchdowns and ARC scored 31 first half points.

ARC started the game firing on all cylinders on offense and defense.

De Anza quarterback Ron Johnson was intercepted by ARC’s Anthony Luke on just the third play of the game.

It took just two more plays for ARC to score, as Vercher hit wide receiver Johnathan Lopez down the right sideline for a 26 yard touchdown to give ARC a 7-0 lead.

Vercher’s second touchdown was a 43 yard shovel pass running back Armand Shyne that gave ARC a 14-0 lead that it would never look back from.

Vercher’s third and final touchdown of the game was a 13-yard touchdown to Khalil Hudson in the second quarter to give ARC a 21-0 lead.

According to offensive coordinator Doug Grush, ARC’s long touchdowns were a product of De Anza’s jailbreak blitzing style of defense they used in the game.

Grush added that De Anza’s scheme was different in this game from what they usually run, as it transitioned from a soft Cover 2 scheme.

Vercher finished the game 14/31 for 159 yards and 3 touchdowns and all three of his touchdowns came in the first half.

ARC’s defense allowed just 62 yards in the first half, as De Anza’s longest drive of that half went just 23 yards, a drive that ended in a failed fourth-down conversion from ARC’s 26 yard line.

These short drives, which averaged just over eight yards per drive, allowed ARC to get the ball back quickly and do the same thing to De Anza that crippled it a week ago.

It also recorded four sacks, three interceptions and gave up 175 yards passing and 42 yards of rushing on 31 carries.

In addition, De Anza’s quarterbacks combined for 15-44 and three touchdowns.

ARC running back Armand Shyne led the charge in this category, rushing for 131 yards and two touchdowns.

“I think we managed well offensively. We played a physical brand of football and played the game the way its supposed to be played,” said ARC head coach Jon Osterhout.

Shyne, whose 55-yard touchdown was the final for either side, gave much of the credit for his performance to his offensive line.

“We just got more together. We made sure all the assignments were correct. The line, they opened it, I read it. And god, of course,” said Shyne.

Now 1-1, ARC will now turn its attention to 1-1 San Joaquin Delta College, who will be coming off a 36-23 loss at home to College of the Siskiyous.

“Good win. We’re going to enjoy it tonight and get ready for (San Joaquin Delta College). Winning is the greatest deodorant,” said Osterhout.