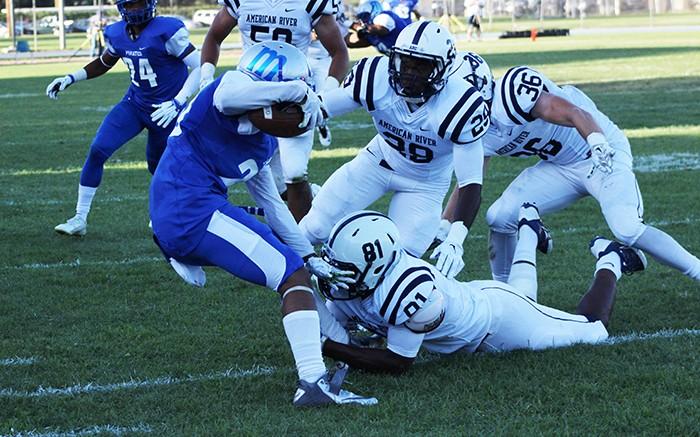 Modesto Junior College defensive back Lesean Collins is tackled by American River College wide receiver Malik Dumetz after intercepting a pass from ARC qaurterback Chris Guillen during the season opener on Sept. 5, 2015. ARC blamed the loss on a poor week of practice. (Photo by Barbara Harvey)

Wide receiver Marc Ellis said the team’s practices in the days prior to Saturday were not good overall.

“We came in with too big a chip on our shoulder,” he said. “Our practice wasn’t great at all this week and I think it showed on the field.”

Ellis said the practice habits directly translated to the team’s play on the field.

“I think the reason (for the loss) is that we as a whole had a mediocre week of practice and it came over to the game,” said Suarez.

The offense struggled in the first half, going scoreless in the first quarter while amassing four three and outs its first four possessions.

While chemistry was an issue, many were quick to dispel it being a prolonged issue.

“(It’s) really just timing on our routes,” Ellis said. “Just working hard in practice and preparing for the defense.”

Head coach Jon Osterhout looked at the loss simply as a bump in the road and saw no reason to dwell on it.

Ellis said Modesto’s success combined with ARC’s inability to move the ball got the team down.

“When Modesto made big plays it lowered our morale,” he said. “(It was) definitely a gut check.”

“We’re definitely capable of making big plays, long drives when we put our minds to it,” said Ellis.

The defense picked up in the second half of the game, but big plays were prevalent for Modesto early on as it had control of the game from the opening kick.

“We (have) to get off the field on third down regardless,” said Lou Baiz, ARC’s defensive coordinator. “Once we adjusted to the pace of their no huddle, I thought we had some good stops.”

Baiz said going back to the basics is the only focus of the team.

“We’re not going to panic and make a bunch of changes. We just have to line up and execute,” he said.

“We have a certain way we operate,” he said. “We’re extremely processed based. I feel very confident in our players in terms of resiliency and our desire to play better, improve, and get better in practice.”