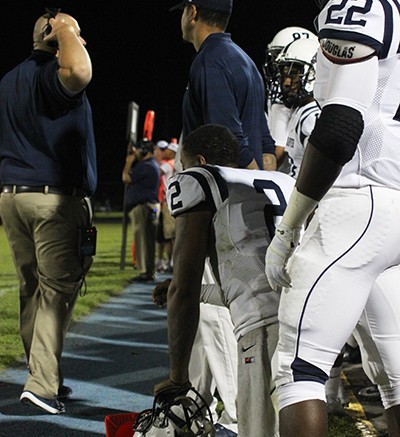 American River College quarterback Jihad Vercher, left, watches from the sidelines after being pulled in the third quarter. Vercher, a sophmore transfer from Sacramento State, had 259 passing yards with one touchdown and one interception. (Photo by Barbara Harvey)

Starter Jihad Vercher was pulled in the third quarter after throwing two interceptions.

Chris Guillen replaced Vercher, who threw two himself before being replaced by Evan Moore, who threw another that was returned for a touchdown.

ARC finished with five turnovers in the game, including a fumble by Vercher that was returned by MJC for a touchdown.

Despite the 30-point loss, Vercher said the game was not indicative of ARC’s talent.

“We can do a lot better. The scoreboard tonight doesn’t show what we’re capable of. We take it on the chin, roll on it and move on,” he said.

“Mentally, we started clicking … sidelines were quiet. Coaches will try to take the blame, but at the end of the day, it’s on us.”

ARC’s first four drives of the game all ended in three and outs before it moved the ball to MJC’s one yard-line, where it was forced to settle for a field goal.

According to defensive captain and linebacker Jordan Kunaszyk, the offense’s inability to move the ball affected the defense.

“Offense was struggling, so the defense was trying to pick up the slack. We weren’t getting much of a breather.”

ARC’s only touchdown of the night did not come until the second quarter, when a 3-yard touchdown pass to Zack Suarez cut ARC’s deficit to 10 going into the half.

However, ARC was able to finish with 389 yards passing split between Vercher, Guillen and Moore and was able to get yards when throwing down the field to its bigger receivers.

ARC offensive coordinator Doug Grush said that MJC’s defense, which allowed 395 yards and 37 points per game last season, was not the cause of his unit’s dysfunction.

“(It was) nothing them, it was us. We just didn’t execute … we just didn’t do what we needed to do. They’re good, but hats off to them, they played well, we didn’t,” he said.

Joker is a depressing, creepy look at society