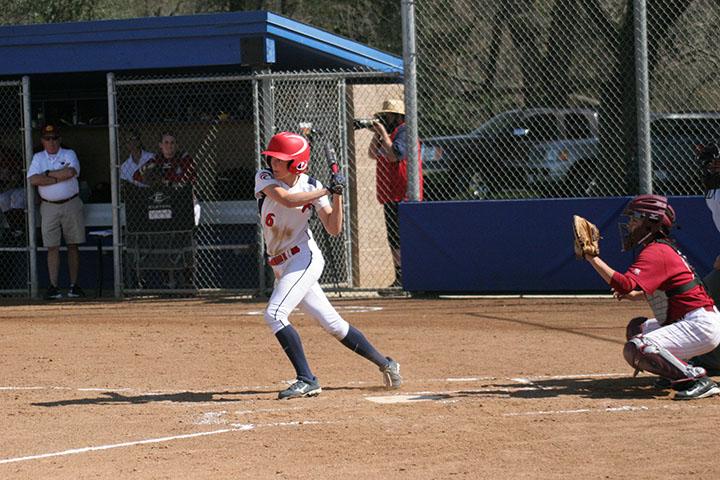 American River College’s softball team swept a doubleheader against Sacramento City College Saturday, with ARC getting off to a 6-1 lead to start the first game, and erasing a five point deficit in the second game to win.

ARC scored in the first inning when outfielder Stephanie Scott crossed the plate to make it 1-0.

ARC would take control of the game in the third inning, scoring four times to gain a 6-1 lead.

Sac City scored once in the sixth inning and two more times in the seventh to cut ARC’s lead to three.

In the bottom of the seventh, Sac City had the tying runs on base, but ARC was able to register an out that ended the game in a 7-4 win.

In the second game, it was Sac City who got off to a hot start, getting off to a 3-0 lead in the second inning.

Although Albert started the first game off hot, she struggled to start the second, which she blamed on fatigue.

ARC’s comeback would begin in the fifth inning with Sac City leading 7-3.

Despite the deficit, ARC head coach Lisa Delgado says she never doubted her team’s ability to erase the deficit.

ARC was able to get on the board in the third inning when infielder Kaylee Avilla’s RBI helped cut Sac City’s lead to 6-2.

Avilla says the biggest factor that got her the two RBI’s was speed.

“We had fast runners on, so they took advantage of the ball that was hit behind them,” said Avilla.

The lead would be further cut down when infielder Jennifer Woo and Albert each scored scored RBI’s in the fifth inning to cut the lead to 7-5.

ARC took the lead when Tarlandoukht and outfielder Emily Butcoff each registered RBI’s to take an 8-7 lead.

Albert would register another RBI in the sixth inning to give ARC a 9-7 lead that it would not relinquish.

Those two wins now move ARC’s overall record to 13-5. Its next game will be at Sierra College on March 10.

For ARC’s Albert, road from ACL tear recovery was more than just rehab