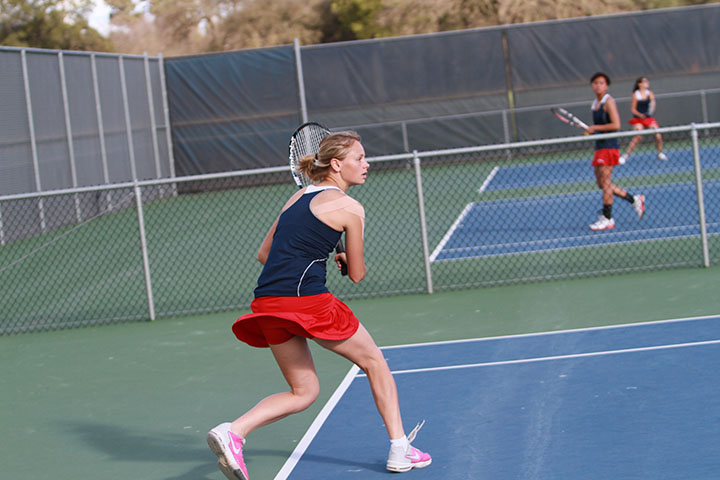 Freshman Ryan Wilson and TJ Aukland won the number two doubles by a score of 8-4, while Nic Atkinson and John Foote won their number three doubles 8-5.

At the number one doubles, Seppi Capaul and Jimmy Giovannini got down early to SRJC, but they were unable to hold off ARC to win a tiebreaker 7-5.

Despite the loss, ARC was still up 2-1 in the match before singles matches, but needed three singles victories to clinch a dual team match.

Five of the first six singles matches went to ARC, but freshman Dylan King and Wilson fell in their respective matches.

The match came down to a singles match between Giovannini and SRJC’s Landon Browne, with Giovanni winning 5-3 to give ARC the win.

“The guys really came through. On all the courts we played well, even that one we lost, we battled back against a really good team and we gave ourselves a chance,” said ARC men’s tennis head coach Bo Jabery-Madison.

The women’s team started its match by winning two of the three doubles matches, by scores of 9-7 and 8-6.

However, they lost the number three doubles match 8-0.

ARC’s Kashia Lynhiavue lost her number six singles in two matches by scores of 6-1 and 6-0, while ARC’s Claudia Plascencia Astudillo also lost her number three singles match to SRJC’s Coral Imhoff 6-1 and 6-4 in each of their matches.

“(We) did a great job today, represented the college extremely well. We played at a very high level, this is the number one team in our conference, gave them a really good push … had a great day and represented the Beavers and American River College today,” said ARC women’s tennis head coach Reed Stout.

Both tennis teams will play at Santa Rosa in a rematch on March 17.