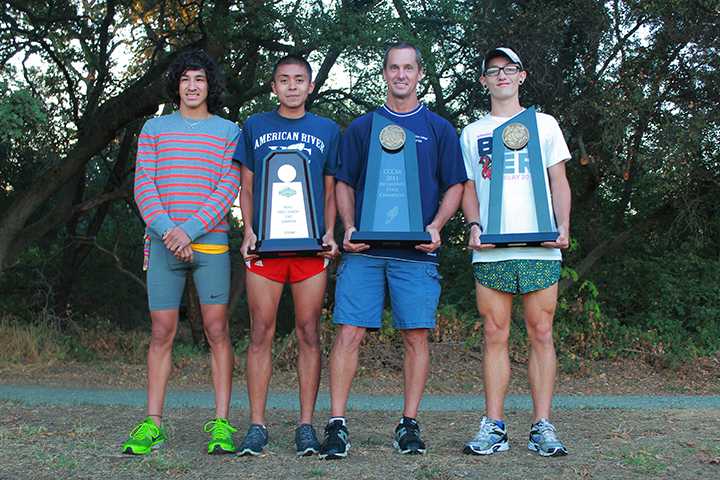 By Kevin Sheridan and Matthew Peirson

Anderson attributes the success to consistency.

“Consistency in coaching is probably the biggest (factor). If every guy (high school coaches) sent was ineligible, we’d stop getting those guys,” said Anderson.

He says he also believes developing a rapport with coaches plays a large role.

While his vision of how to be successful is clear, his path to ARC was not.

Anderson enrolled at ARC after lettering in cross country all three seasons in which he participated at Cordova High School and being named Metro League mile champion in his senior season.

He competed in one season of both cross country and track and field before enlisting in the U.S. Navy, where he served on the U.S.S. Nimitz and served in Virginia and Washington for six years.

Anderson says he joined the Navy because he struggled in school.

“You go to school because you know you’re supposed to go to school. I went because I had to go. (I) wasn’t doing well in college, starting doing some construction. Just wanted (something) different. I would study and just not do well in class,” said Anderson.

He added that the most important the Navy taught him was maturity.

After re-enrolling at ARC in 1993, Anderson won Pepsi Scholar Athlete of the Year award after finishing the semester with a GPA of 4.0 and was voted captain of his track team.

Anderson received academic renewal, wiping out some of the bad grades he received earlier in his college career.

Anderson graduated from Sacramento State with a masters degree in kinesiology sports performance with a GPA of 3.74.

Anderson has won Northern California Community College Cross Country Coach of the Year seven times, including in 2012 and last season in 2014.

In the 2014 season, men’s cross country finished second overall in the state for the first time in three years, losing out to College of the Canyons in the State Championships in November.

Despite the loss, Anderson said he is confident his team will reclaim the title because of the talent on the roster.

In the 2014 season, Anderson won his seventh coach of the year award, but says the experience is humbling.

“People will laugh because I don’t seem like a humble guy … It’s really nice to win,” said Anderson.

He added that the one thing that led to him winning the award was his team’s performance at NorCal.

“It was a total dominant effort at the cross country Nor Cals … we had six of the top eight out of 106 runners,” said Anderson.

Although Anderson finished the 2014 season as Coach of the Year, his team finished second in the state after three consecutive seasons of finishing first in the state.

Despite last season’s disappointment, Anderson said he believes this year’s team is one of the strongest teams he has had in his tenure at ARC.

“No one’s getting past us this year (in track). It’s just not gonna happen,” said Anderson.

Logan Stahl, who runs the 400, 800, and 1500 meter races, says Anderson has created a family environment on the cross country team.

“He creates this environment of family. So its really easy to feel like you’re a part of a family and so everything’s relaxed, which is really good for a team to have,” said Stahl.

It’s time to bring the “community” back to community college