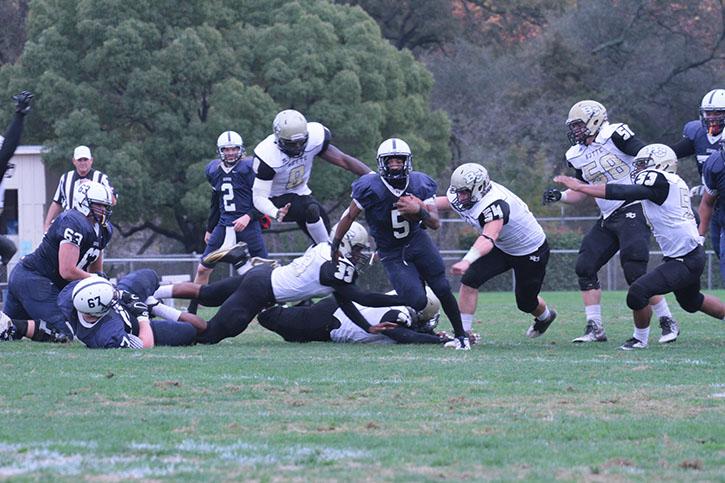 Emotions were high Saturday as running back Deon Ransom ran for 187 yards and three rushing touchdowns to help the American River College football team defeat Butte College 20-17 in Saturday’s Gridiron Classic Bowl, a rematch against the only team to beat ARC during the regular season.

It was a close, tense game that came down to the final play, but if not for special teams woes, one that ARC could have easily controlled, outgaining Butte by over 150 yards and holding the Roadrunners to 5 of 16 on third down attempts.

Ransom dominated the opposing defense for the second week in a row, and has now run for 460 yards and five touchdowns total in the last two games.

After playing as a defensive back in his freshman season, Ransom seems to have finally solidified himself as a No. 1 option in ARC’s backfield, a notion head coach Jon Osterhout acknowledges.

Saturday’s game was the second chance for ARC to beat Butte, after just two weeks previously giving up six turnovers en route to a 31-28 loss.

“It was good to get redemption, that’s for sure,” said Osterhout.

ARC offensive coordinator Doug Grush was also glad to come away with a win against Butte.

“That’s a whale of a football team. And playing them twice in three weeks sucks — I’m glad we don’t play them again,” said Grush.

Other ARC players, including Ransom, seemed jubilant to have vanquished the only foe to get the best of them in their first season under Osterhout.

Frustration seemed to reach a boiling point between both teams mid-game, when a fight broke out on the field after a Butte punt.

After the officiating crew convened for quite a long time, they announced that Butte players receiver James Hyde and defensive back Saint Evans II would be ejected from the game.

Evans II had returned a blocked field goal 69 yards for a touchdown earlier in the game.

In fact, ARC had both field goal attempts blocked by Butte in the game, and also missed a PAT.

ARC wide receiver Tyler Young led the team’s receivers with 10 catches for 125 yards, and quarterback Tanner Trosin threw 23-37 and 210 passing yards in the win. The two hooked up for six third-down conversions against Butte, something Young said is a point of emphasis in practice.

“We work on that in practice. It’s third down, we gotta convert, (Trosin) knows he can rely on me and I can rely on him to get me the ball,” said Young.

Meanwhile, Trosin continues to recover from a sprained ankle from earlier in the season. While he appears more mobile than in previous weeks, Trosin said he’s still affected by it almost a month later.

“I’m on one foot right now,” Trosin said after the win.

For the third straight week, ARC finished the game with no defensive interceptions, something defensive back Kameron Williams credits to opponents’ fear of being picked off by the Beavers’ ball-hawking secondary.

“Most offenses are scared to do what they usually do against other teams because they know we’re one of the best defenses in the nation,” Williams said.