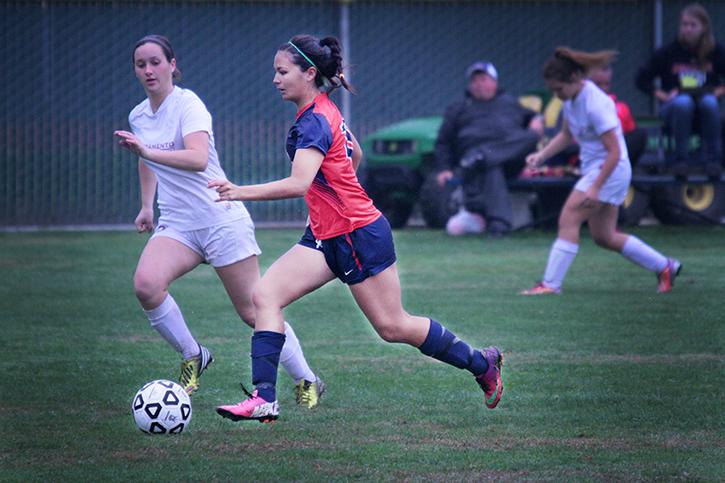 Sophomore mid-fielder Haley Halaran drives the ball down field during a match against Sacramento City College. Halaran eventually scored against SCC by hitting the ball into the goal with her head.

The women’s soccer team won its final game 3-2, in a close match against Sacramento City College on Thursday, leaving its record for the season at 6-11-2.

“I’m happy we won but it wasn’t the greatest game, we let them (SCC) in and they scored two goals. We made it a lot more difficult for ourselves than it should have been,” said coach Paul Arellanes.

The team was in control of the ball all first half constantly pushing SCC back to its own goal and almost scoring numerous times.

SCC tried to prevent American River College from scoring by attempting to kick the ball out of bounds off of ARC players to regain possession.

SCC knocked the ball out of bounds too close to their goal, and ARC was able to perform a corner kick which was blocked and sent towards Haley Halaran, an ARC middle and forward, who hit the ball with her head into the goal scoring the first point of the game.

The point was an accomplishment for Halaran who was playing her last game for ARC.

“Its great. I’ve been trying to get a header forever and I finally got one, so it was awesome,” said Halaran.

ARC ended the first half leading 1-0.

During the second half of the match, SCC tied the game creating an air of tension effectively changing the feel of the game.

After minutes of back and forths between the teams, SCC scored again tying ARC 2-2.

ARC was later able to pull ahead when Natalie Silcox, an ARC middle and forward, scored a goal with an assist by McCall Madriago, another ARC player, resulting in a one point lead 3-2.

After scoring the final point the team ran out the clock and took victory over SCC.

Shortly before the game began, ARC acknowledged the sophomore team members who would be playing their final home match, giving each of them a bouquet of flowers as a farewell gift.

“They invest two years of their lives and I invested two years. It’s always sad to see them go, but also happy that they will be moving on to a four year (college),” said Arellanes.

Wastebook: The effects of social media on society