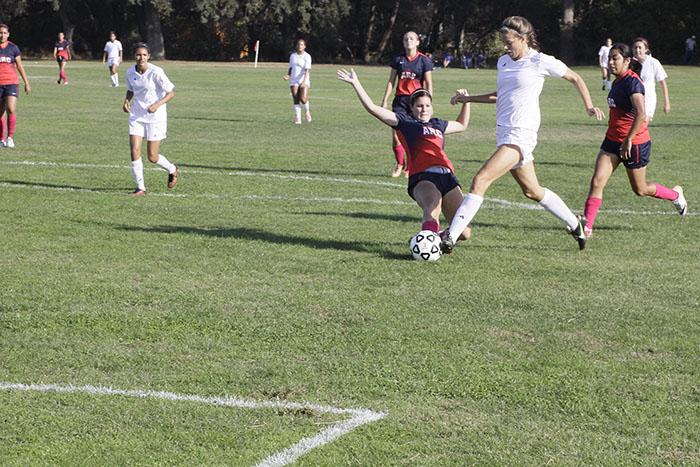 An ARC women’s soccer player dives for the ball during their game Oct. 24 against Modesto Junior College.

Modesto scored all three of its goals in the first half of the game.

ARC not only managed to prevent Modesto scoring again in the second half, but midfielder Gabriella Kerwin, was able to score the only goal for her team.

“I shot it as hard as I can, and Gabby finished it,” Wong said.

“The second half at least we could look at each other in the eye and say, ‘Hey, we did a good job,’ but the object of the game is to win games, not halves,” Arellanes said.

ARC’s goalie Stephanie Doss was hurt in the first half, but was able to finish the game.

“A girl came in and hit me in the back of the head,” Doss said. “It didn’t hurt too bad, just knocked me around.”

“(The) first half was not so well,” said Doss. “We have played better the first two times we played them. They are number one in the state, so it’s obviously going to be a difficult game.”

ARC’s next game is Oct. 28 against Sierra College. ARC lost to Sierra 3-0 the last time they played each other in September.

“We’ve come a long way since we’ve played them,” Doss said. “We have really grown as a team.”

“If we can put a consistent 90 minutes, there are not many teams we can’t play with,” said Arellanes.

Debate: How should Columbus Day be commemorated?