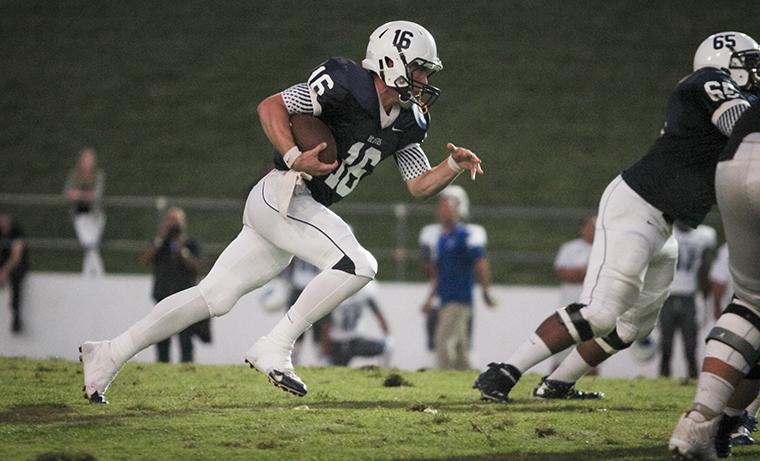 Backup quarterback Peyton Wilfley runs the ball through the College of San Mateo’s defensive line during the game against San Mateo Saturday Oct. 4.

Typically, playing two quarterbacks in the same game is unusual. Despite this, the American River College football team plays two of their five quarterbacks every game.

Sophomore Tanner Trosin and freshman Peyton Wilfley split playing time during games, with both seeing the field at different points in the game.

Trosin is the team’s starter, with Wilfley starting the first series of the second quarter and then the quarterbacks are alternated throughout the game.

Trosin was a highly sought wide receiver coming out of Folsom High School, where he helped his team win a state championship in 2010.

Beaver head coach Jon Osterhout says ARC used a two quarterback system last season and that he feels comfortable with the ability of both quarterbacks.

“The main reason we’re playing two quarterbacks is because we’re comfortable with their ability to run our offense,” Osterhout said.

According to Osterhout, there was a competition at quarterback during the summer, and that whoever ended up being the number two was going to have the opportunity to play.

Despite the situation being unusual, both quarterbacks said they liked the idea when it was first proposed to them.

“I honestly liked it, being in a (junior college), obviously the goal is to win games with the ultimate goal (being) to move onto the next level, so doing this, it gives us the opportunity to get plays and to have an opportunity to build a resume and eventually go on to a four-year so I kinda liked it because it gives people an opportunity,” said Wilfley.

Both Wilfley and Trosin are athletic enough to make plays with their legs, one of the features Osterhout looks for in a quarterback.

“We’re looking for someone (with) leadership ability, poise in the pocket, poise during the game and someone who can manage the game,” said Osterhout.

Despite having to split time, Osterhout says both players must put aside their egos for the good of the team.

“It’s (about) them understanding their role within the program. We play the best guy,” said Osterhout.

One of the reasons a two quarterback system is not used by other teams is because the team’s receivers can often have a difficult time adjusting to the cadence of a different quarterback, resulting in a lack of chemistry between the receivers and the quarterback.

Despite this, Osterhout says his receivers feel comfortable with catching passes from two different quarterbacks.

“I think the receivers feel comfortable with the quarterbacks. It’s about the ability to throw the ball,” said Osterhout.

Trosin says he is more than willing to share knowledge and experience with Wilfley for the sake of the team.

“Trying to get better is what we do. If I got knowledge that maybe he doesn’t know, I’m gonna give him so that he can take that on the field so we’re both giving each other knowledge so that when we go out there on the field, we’re well prepared to do our job,” said Trosin.

Be the first to comment on "ARC employs two quarterback system"