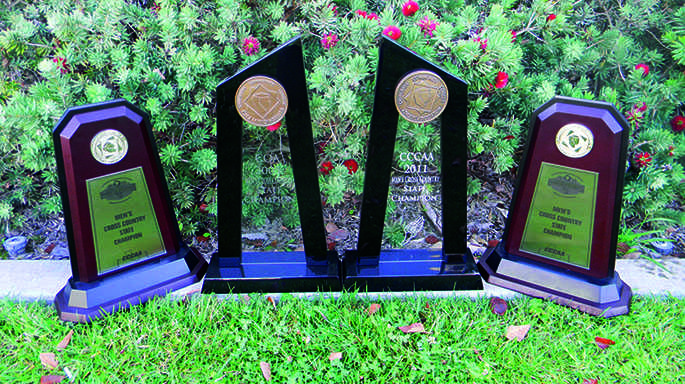 American River College’s Men’s Cross Country team is gearing up for their fourth straight championship at the Big 8 Conference and they are confident about this year’s meet.

With the Big 8 Conference championships coming up at the end of the month, the men’s team is staying focused and determined to take the championship home in hopes of solidifying their undisputed record for the past 3 years in the district.

With the best time at 5:00.8  for the mile, the majority of the team ran the mile in under 5:30 during their last invitational.

“We have 12-13 runners that are better than most schools top 2 or 3,” said Anderson.  “This season we have good recruits and good athletes.”

Most notably, Patrick Jagerson and Sean Jagerson, fraternal twins both in their sophomore year at ARC, are both top runners at the school and are at the top of their game, both ranking in the top 15 during their last meet at the Crystal Springs Invitational.

“Our strategy is to run as fast as we can and not to worry about what the other teams are doing,” said Anderson.

ARC’s reign has remained unquestioned in the past and in the Big 8 will add to yet another record that the ARC cross country has set.

“We have been doing well. Very well. And we are going to get better.  A lot better,” said Anderson, confident in this year’s squadron.

The team is excited and ready for the invitation, training hard and taking extra precautions in preparing for the upcoming event.

Freshman Abdul Hamid is anticipating for the upcoming challenge.