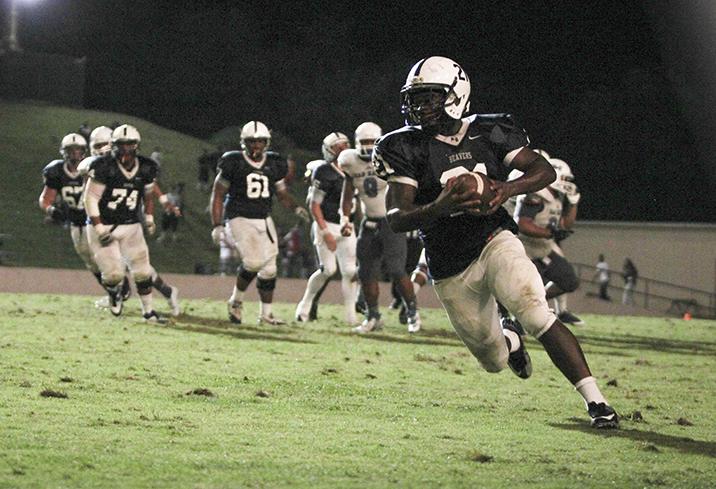 American River College football team is now ranked first in the state, according to the California Community College Athletics Association, after beating San Mateo, who was previously in first. (Photo by Emily K. Rabasto)

American River College’s football team beat College of San Mateo 24-14 over the weekend to improve to 5-0 on the season, largely behind quarterback Tanner Trosin’s strong early play and a defense that forced four timely turnovers.

ARC made it’s own share of mistakes though, committing five turnovers throughout the game and keeping San Mateo (4-1) in contention towards the end.

Three of those turnovers came from Trosin, who threw two interceptions and lost one fumble. ARC as a team lost six fumbles total, only three of which were recovered by San Mateo, a considerably lucky split.

Head coach Jon Osterhout said ARC “left some plays on the field”, and that ball security will be an area of focus in practice going forward.

“We’re gonna continue to get better, because these kids practice hard, do things in the right way, and they believe,” Osterhout said.

Despite his turnovers, Trosin also lead the team as a dual threat early in the game, helping them get out to a 14-0 lead.

“It’s just how you respond back on the next play,” Trosin said of the turnovers. “You don’t look back on what you’ve done, you move forward.”

Trosin took the Beavers on two touchdown drives, the first ending with a touchdown run by Trosin, and the second with a passing touchdown to receiver Tyler Young.

ARC’s defense did force four turnovers though, effectively killing momentum for San Mateo, a team that defeated all of it’s previous opponents this season by an average spread of 35.8 points per game.

ARC was ranked third before the game by the CCCFCA, and after holding the high-volume San Mateo offense to it’s lowest score of the season, the Beavers moved into first place.

Receiver Jjuan Muldrow, who caught a touchdown reception from backup quarterback Peyton Wilfley in the fourth quarter, said that he believes ARC deserves to be ranked first, and that he also thinks going undefeated in the regular season is an attainable goal.

“We just gotta push harder now because every team is gonna want the best shot of us since we just beat the number one team,” Muldrow said.

For now, though, the Beavers can celebrate being 5-0 after a difficult schedule in it’s first half of the season.

“It feels f—ing great, to be honest,” said Trosin of being undefeated. “We’re just gonna keep on pushing.”

ARC now enters a bye week, and will face the College of the Siskiyous the following week, in it’s first of five straight games against the National NorCal Conference.