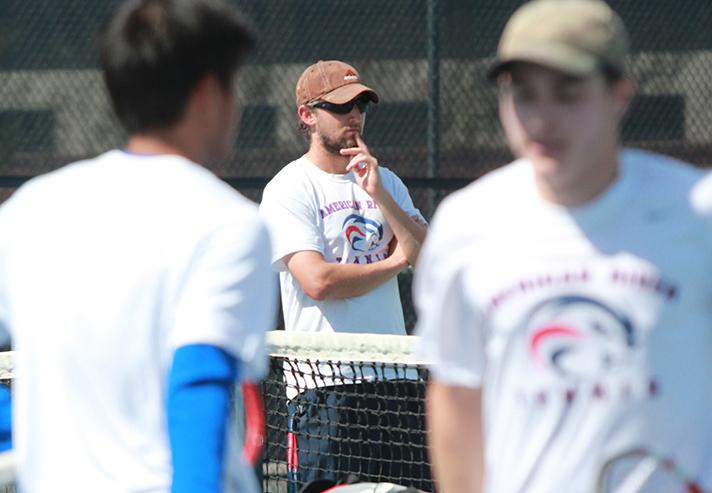 Coach Bobak Jabery-Madison watches his team play on Mar. 21. Jabery Madison won his second Coach of the Year award, and five of the men's tennis players made the Big-8 All Conference team. Photo by Emily K. Rabasto

American River College’s men’s tennis club finished its season a decorated group. In addition to some historic performances at the Individual Regional and State Championships, five members of the club were named to the Big 8 All-Conference Team.

In addition to these honors, Singh competed in the individual singles final, making him the second ranked player of 80 in the tournament. Not since Larry Hall won a state championship to clinch the top rank in 1966 has a member of ARC’s tennis program ranked so high in singles play.

Singh was also named Rookie Player of the Year by the Intercollegiate Tennis Association, and is the first Beaver since Hall to compete in the state final.

“That was an exciting result,” said head coach Bo Jabery-Madison, who won Coach of the Year honors this season for the second time during his tenure at ARC.

After winning the award, Jabery-Madison took time to review the nominees, and took pride in learning that voters thought him a worthy candidate for more than his team’s performance in actual competition.

“They did talk about the winning record and all that, but they also talked about the way our players carried themselves,” Jabery-Madison said. “(They talked about) their court demeanor, their attitudes, their sportsmanship and also about our team GPAs. The reason that I won that award was because of our team, off the court.”

The importance of off-court success is reinforced throughout the tennis program, according to Valentine, who was nominated for the Arthur Ashe Sportsmanship Award.

“It’s about being responsible for yourself … It’s about learning life skills, getting your life together and focusing on things that matter, like school,” said Valentine.

In addition to the team-mandated study hour, which takes place daily, Valentine spent additional time with Singh focusing on academic improvement, a point of emphasis for Singh this season.

Despite exceptional performance in the classroom and several award-winning performances, the program is somewhat disappointed in not having won the Team GPA award in several years.

With the season ended, Jabery-Madison will now shift his focus to the futures of his athletes, specifically communicating with programs that show interest in them.

Duong and Valentine will be spending another year at ARC to complete requirements for their fields of study, which include high-level math and biology courses. Both will be looking to continue their careers at four-year institutions after transferring.

“They had a phenomenal season and represented the college extremely well,” said ARC athletic director Greg Warzecka. “I think it’s great. It shows that these students are doing well competitively. We’re also getting statistics in the next month or so that will show how student athletes compare to the general student population academically. That, I think will be a proud moment.”

Be the first to comment on "Tennis program shines at state final, earns praise for off-court success"