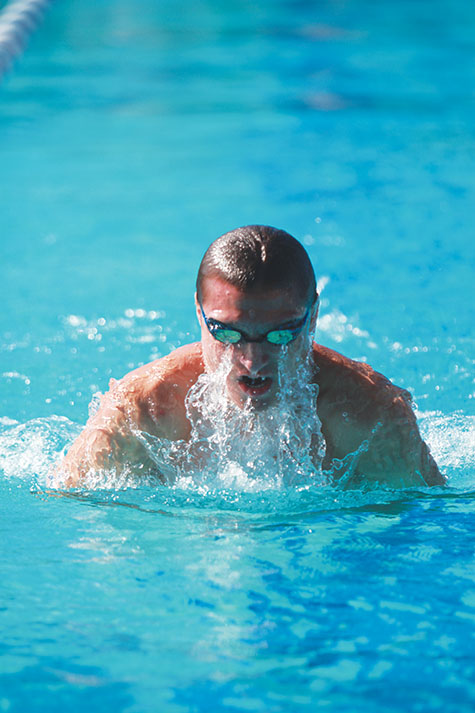 The American River College men’s swim team competed in the Big 8 Conference championships this weekend, in the third straight year they have made an appearance.

The team finished third in the conference in 2013, breaking the 400 medley relay record with a time of 3 minutes 30.23 seconds, a record time that was previously set in 2009.

Despite the obvious pressure, head coach Eric Black and swim athletes listen to country music over the loudspeaker during their practices. “(The music) adds a bit of atmosphere to training. I enjoy the music out here in the morning,” said Black.

“(The music choice) is whatever I feel like on that day … Lynyrd Skynyrd, Aerosmith, R&B, whatever,” he continued.

Eric Black has also been coaching swim for 29 years at Fairfield University, part time at Sierra College and at De Anza College.

The ARC men’s swim team has finished no worse than 12th in the state in his 29 years as head coach, and only four records have not been broken by his team during his tenure.

“He’s a great coach, he’s on our a– in training, when people aren’t doing well … he wants everyone to change so they become more well rounded swimmers,” said Kyle Kellan, a sprint-freestyle/backstroke athlete and redshirt freshman.

ARC plays in a tough conference, with four teams in the conference making the top 10 in state this year.

The last four or five years, everyone on the men’s swim team has made state, with both the freestyler and diver winning state.

“The Big 8 championships are in two weeks, we’ll finish about fourth, we don’t have the depth (in terms of guys being able to score at conference),” said Black about his team’s chances at the championship meetings.

The team has gotten great performances from freshman Brenton Sayers, a 500, 100 and 200 freestyler and Lane Goedheart, a sprint freestyler.

The swim team currently has 18 swimmers on it’s roster, a decrease of seven swimmers from a roster that featured 25 one year ago.

Due to this, the men’s swim team has had to adapt, forcing some athletes to take on larger roles.

“I think we found our groove. We’ve been throwing swimmers in odd events … it’s shown they can (be versatile). When the time comes, they’ll be ready to go,” said Kellan.

“All of us (have to) adapt to the talent and experience level of a team … this year we don’t have a true backstroker, so I had to talk to some of our guys about getting better at backstroking,” said Black.

“He’s a really good coach. He’s fun to be around, he knows what he’s talking about, and he knows how to push us in practice,” said freshman Connor Vaughn, a 200-500 freestyler.

For results from the Big 8 Conference championships, check the sports section at the Current’s website, arcurrent.com