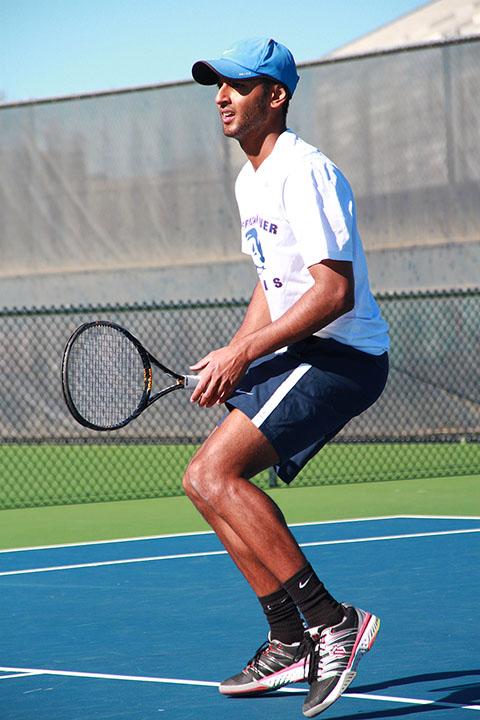 Lovedeep Singh warms up before a singles match at American River College on Friday, March 21, 2014. Singh has known ARC tennis head coach Bo Jabery-Madison since he was a preteen and says he is happy to be taught by him at the college level. Photo by Emily K. Rabasto

The same drills, for hours on end, countless reps, on the same machine, pre-game rituals and superstitious habits. Each of these activities are designed to take the strenuous, volatile experience of competition and create some kind of familiarity.

In the case of American River College head tennis coach Bo Jabery-Madison and his best player Lovedeep Singh, familiarity is one thing that certainly does not need to be created.

“(Singh) was probably 12 or 13 when I met him,” Jabery-Madison said. “He was an up-and-coming young junior player, kind of getting some notoriety. A lot of the time you see with these high-level junior players, an attitude of entitlement. He was just a really nice young kid, very friendly, affable, very talkative.”

Singh, known to his coaches and teammates as “Deep,” continued his standout play through his preteens and high school. Singh’s father saw his son’s potential and thought it wise for him to place an emphasis on getting in better physical shape.

As a part-time coach at ARC, Jabery-Madison built a reputation in the local tennis scene as being a very effective in improving player’s strength and conditioning, and was a natural choice for one-on-one sessions with Singh.

Due to California Community College Athletic Association regulations, Jabery-Madison was unable to include Singh in most activates involving ARC, but Singh would occasionally hit with members of ARC’s program at local tennis clubs.

Due to academic shortcomings, Singh’s options were limited after high school. Singh passed opportunities with division two, division three and National Association of Intercollegiate Athletics schools, to join his long-time mentor’s team, and has made the most of it thus far.

Jabery-Madison has high expectations for Singh, and has continued to mentor him away from the tennis court.

“Talent wise and ability wise, he’s an NCAA division one tennis player, there’s no question about that,” Jabery-Madison said. “The academic and classroom side of it, he didn’t fulfill those requirements for the places that he wanted to go … I’ve gotten grade-check cards, talked to his teachers … at least twice a week I’m talking to him about his classes.”

Singh has been studying with teammate Kevin Valentine, who he sought out prior to this tennis season, and has offered some mutual tutelage.

“The deal is I help him with his homework and then he helps me out on the tennis court’” said Valentine. “We gel pretty well … we work out together a lot too.

“It’s different, he expects a lot of things from me and they’re all reasonable, I know they’re going to make me better,” said Singh.

Jabery-Madison describes Singh as “the best” player he’s ever coached, and believes his peak is beyond even his ambitious high school aspirations.

Be the first to comment on "Lovedeep and Bo: Mentor and mentee on the tennis court"