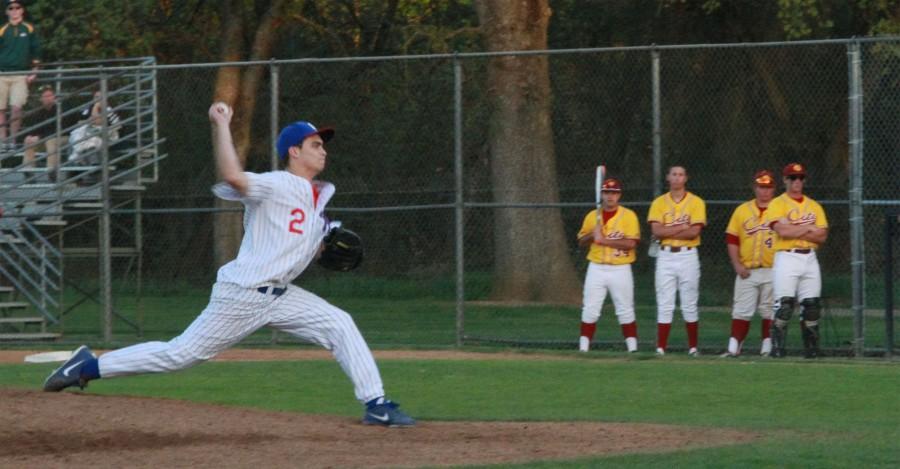 An RBI double in the top of the sixth inning by Sacramento City College’s designated hitter Alex Muzzi was the lone run in American River College’s 1-0 loss to Sac City at Friday’s baseball game.

“Neither team is a very offensive club to begin with. I think both of us have kind of built our teams around pitching and defense, and then you throw in a couple good pitchers–Jake Campbell has been good for us all year, their guy (Gabe Araj) has an ERA under one, and he’s been doing a good job for them too. So it was just a couple teams playing to their strengths tonight, and they got the one hit.”

“(I) threw a couple too many balls. Could’ve been better,” Campbell said.

“Jake did a great job. As usual, Patrick Upchurch came in and pitched really well, got the outs, made some big outs. The pitching all season has been outstanding,” Jumelet said.

Left fielder Joe Williams felt that ARC was lacking focus at the plate.

“A lot of it is just approach, and I don’t think that we took the right approach today. Whether it’s no strikes, two strikes, ahead in the count, I just don’t think we were as focused at the plate today as we could have been,” said Williams. “With four hits through nine innings, that really tells the story right there.”

Despite the loss, Jumelet believes the team has been stronger overall this season.

“We’ve been a little more up and down than I thought we would, but we’ve played well most of the time. The first two games this series didn’t go very well, we didn’t play very good defense, but for the most part the guys have been playing hard,” Jumelet said. “We’ve got a good group of guys that have, for the most part, bought into what we’re trying to do as far as pitching and playing defense. We’re much, much better than last year, as far as that goes, but offensively, we’re a little light. We just need to get that timely hit.”

“It’s tough to lose these close ones, and it’s tough to get swept by your rival. That’s never fun, but every game in the Big 8 conference is going to be like this,” Jumelet said. “There’s no easy games, and I think seven of the eight teams in our conference are ranked in the top 15 in Northern California, so every game is going to be a dogfight. You’ve just got to scratch and claw for every run you can get, and make the plays when you get the opportunity. There’s going to be a lot more 1-0 games in our league besides just this one.”