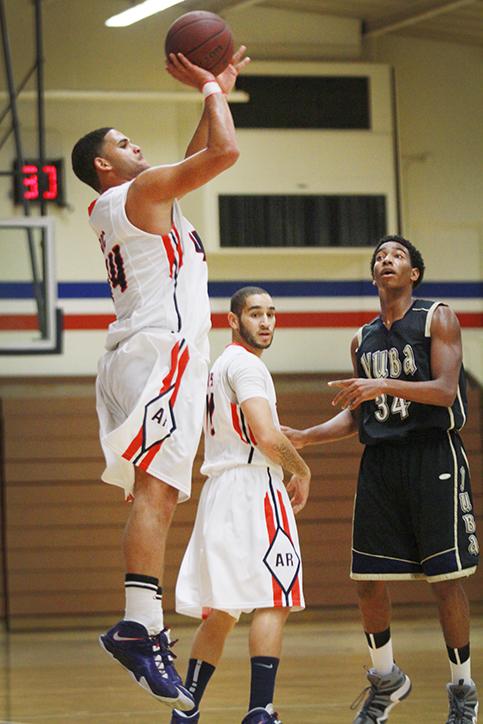 Freshman Alex Powell shoots from the three-point line during the Beaver Classic in a game against Yuba College on Friday, Nov. 15. Photo by Emily K. Rabasto

Water Polo – The women won the Big 8 Conference and finished the season with a 22-10 record. The women lost in the State Tournament to Riverside City College by a score of 2-10.

Volleyball – For the first time ever the women won the Big 8 Conference. They are currently in the third round of playoffs, which took place yesterday against Fresno City College. The winner of that match will advance to the State Championships this weekend.

Basketball – The women got off to a 4-2 start on the season, winning their last game Nov. 26 against Shasta 61-39. They play next at the Cypress Tournament in Cypress, Calif. Friday through Sunday.  Their next home game is Jan. 7 against Sacramento City College.

The men have started off the year with a 1-4 record and have lost the last two games. The men will travel to play in the Monterey Bay Classic tomorrow. Their next home game is Feb. 7 at 7:30 p.m.

Cross Country– The men won the state title for the third year in a row, led by Luis Luna, who finished first overall with a time of 19 minutes 58 seconds.

The women finished the meet 17th out of the 27 teams competing, led by Alexa Lua, who finished in 26th place.

Soccer– The women ended their season with a 0-3 loss to Cosumnes River College, finishing with a record of 4-15. Jazzmin Hancock finished the season with a team-leading three goals, and Sierra Montano led with 4 assists.