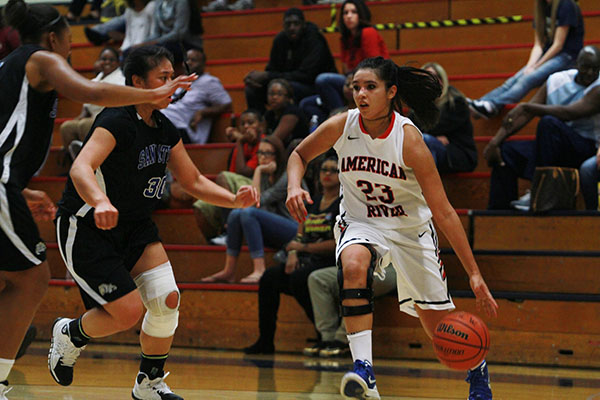 The American River College women’s basketball tipped off its season with a home game Saturday Nov. 9, taking on College of San Mateo.

After finishing last season with a record of 15-16, the women are looking to build the program back up.  The women are returning only one starter from last season, forward Mackenzie Theiler, and are a young team this year.

They have spent the offseason putting in extra work and preparing for the season.

“We have been doing a lot of conditioning on the hill, on the track, making sure everyone completes their time, and we have been practicing everyday Monday through Friday,” freshman Gloria Garcia said.  “It’s been tough, we have a lot of diversity on the team, a lot of people at different levels, so getting everybody at the same level has been a challenge, but we got it.”

Though they are young, the team has already shown signs of promise.  At their first tournament of the year the women went 4-0, and they are already looking to the top.

Though new to the staff, assistant coach Kristen Shimizu is familiar with ARC basketball. She played with the Beavers from 2009 to 2011.

“The (women) have been really good because it is hard in October, because we have four weeks off before our games,” Shimizu said.  “Right now we are just trying to keep it fresh and keep everything consistent. It’s been really good. The (women) take it really well and they are really coachable … I think they are a really good group of girls.”

Lack of size in the frontcourt is a point of concern this season, but the coaching staff is looking to offset this deficiency with speed at the point of attack.

“We are undersized, but we have really good guards … so we have fast guards and an inside scorer (in Garcia),” Shimizu said.

Though the team is young, its players have demonstrated discipline and maturity of a veteran club.

“Their effort is really great, and their attitude is really good, and they know how to compete with each other and still have fun at the same time,” Shimizu said. “I see them enjoying basketball, but also pushing each other.”

Shimizu is concerned about the learning curve. It will take several games for players to adjust to the college level and to develop chemistry together.

Be the first to comment on "For a young team, the sky’s the limit"