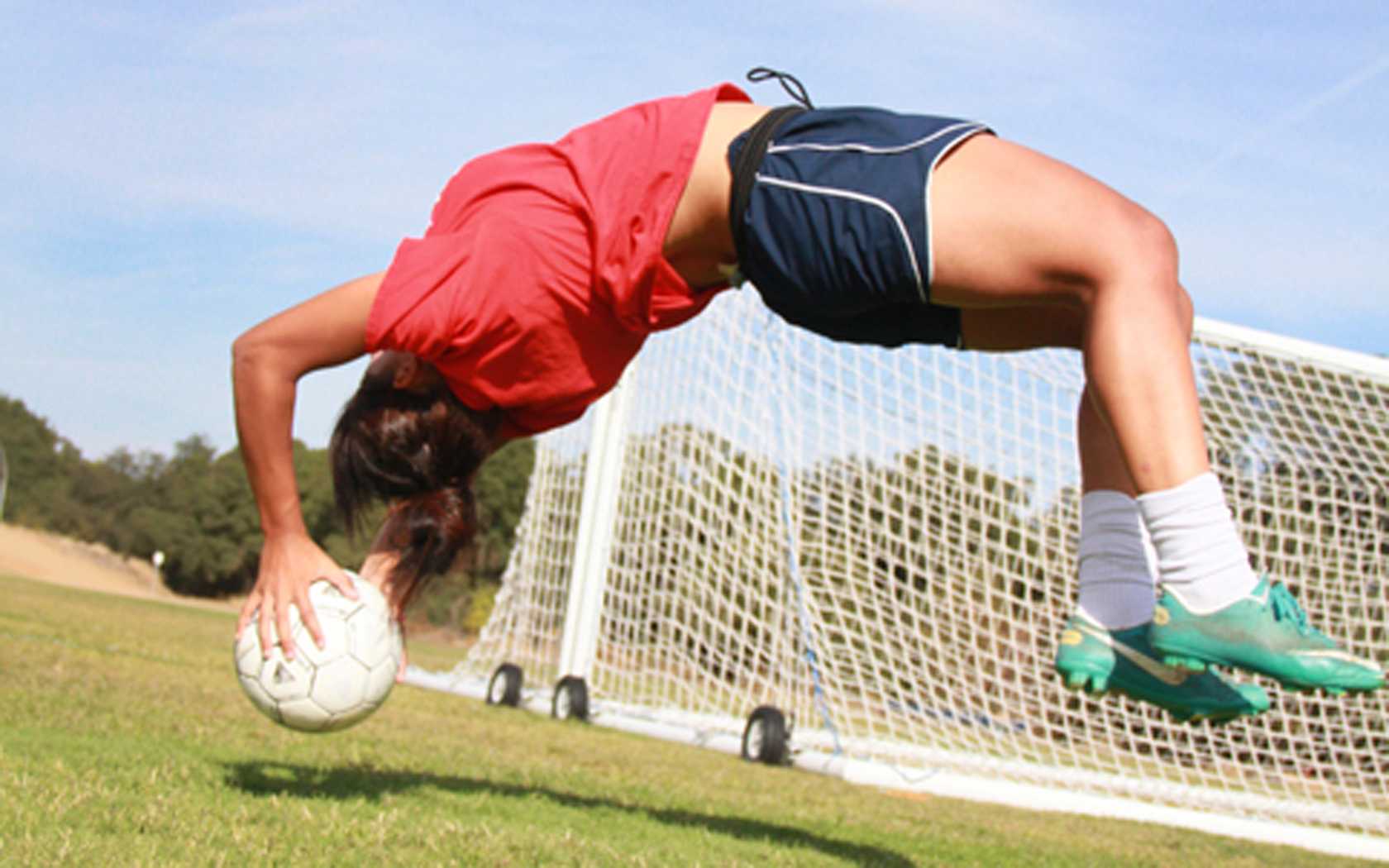 While watching the women’s soccer match fans notice as the ball rolls out of bounds and head coach Paul Arellanes gets up and yells “Jazzmin!”  It sounds as though he might be yelling for a substitution, until a woman goes running to the ball on the sideline and disappears behind the bleachers.  A few seconds later from behind the stands fans see her put the ball on the ground and flip herself over it, launching the soccer ball close to the goal.

For American River College freshman soccer player Jazzmin Hancock the flip throw-in is something she does during matches with a certain look of ease. When the ball goes out of bounds near their attacking goal Hancock is usually the one to take the throw-in.

The main reason behind doing a flip throw-in is to gain an advantage offensively.  When the team gets a throw-in near the goal the flip throw can get the ball in closer to the opponent’s goal.

“When we get an opportunity it’s kind of like a corner kick because it goes so far so we get more scoring opportunities,” Hancock said.

There are few other women who do this type of throw.

“It is pretty rare in the women’s game,” Arellanes said. He has only seen one other girl do a flip throw-in during his time at ARC.

Former Major League Soccer player and Sacramento native Kevin Goldthwaite has seen the move done in matches on a few occasions during his six-year professional career.

“I’ve seen it done maybe a half dozen times,” Goldthwaite said. “It turns a non-threatening throw-in, in the attacking third, into a free kick situation.”

As a player, Goldthwaite wasn’t intimidated by someone on the other team who could do a flip throw-in, but it was something that his teams needed to account for.

“You (do) need to change your game plan a little when an opposing team has a weapon like that,” Goldthwaite said.

Hancock, who has been playing soccer since she was 12 years old, has utilized this move since her freshman year of high school.

“I used to do gymnastics, so it just came easily,” Hancock said. “I just felt like it was something I wanted to try and I did it and now I know how to do it.”

She was inspired to do this type of throw-in simply because, “not that many people do it.”

There are benefits to having a player who can make this type of throw. The physics of the throw can be proven to be a benefit as well.

“You have gravity giving you this fabulous boost, where it turns your legs and all your energy into rotational energy which then goes to the ball, so you get a much better throw,” ARC physics lab technician Blain Wells said. “It’s actually really simple once you kind of look at it. This ball travels this much longer path.”

Another member of the physics department explained the flip throw as a tool in this way.

“In addition to the velocity that she can throw at, she has that additional velocity of her body already moving,” department chair for physics/engineering at ARC Victor Zarate said. “So it would be like running and throwing at the same time, but you can generate a lot more torque, so you can get a lot more flex for it to go really far.”

From the fan point of view it is an exciting thing to see and leaves people wanting more.

“I have never even seen one before, so that was my first time when I was here a couple weeks ago, and it was kind of amazing,” Sierra College student Austin Stewart said.  “You kind of look forward to it … you get to see it almost every time you come out.”

Her teammates also enjoy watching her do her throw in as well.

“I’ve never had a teammate do that. It’s awesome,” sophomore defender Rose Shoen said. “It gives me goose bumps. You’re just like, ‘That was so awesome.’”

The next time that you can see Hancock do her throw-in at ARC will be Oct. 22 at 3:30 p.m. when the Beavers host division rival San Joaquin Delta College.