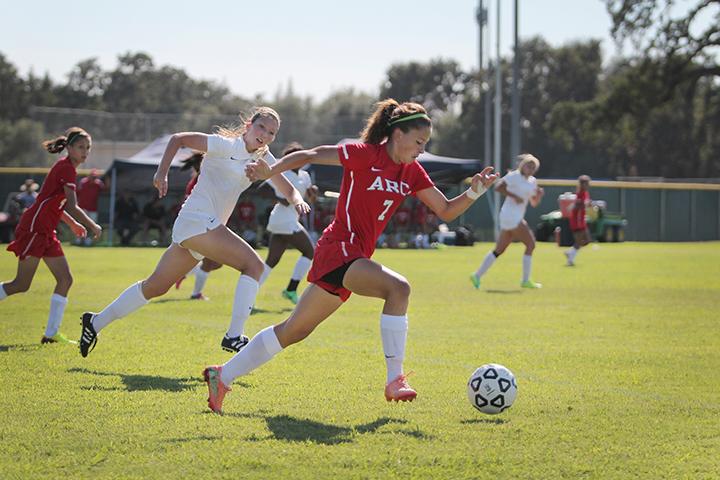 Makayla Ruvalcaba carries the ball down the field in a game against Feather River College on Tuesday, Sept. 10. (Photo by Emily K. Rabasto)

The 2013 season is underway and the American River College women’s soccer team is looking to build off last years successful season. They finished with a 13-6-4 record last season making them the No. 3 ranked team in the Big 8 Conference.

After losing their two leading scorers from last season, Ceci Velazquez and Alexis Wallace, there is a void that the team needs to fill.

This year’s roster has 13 freshmen on it, so the team chemistry will be something they will have to get down early with games coming up against teams who are ranked higher in the state poll from the California Community College Athletic Association.

“I think the chemistry is coming along, its just trying to get everyone on the same page right now,” head coach Paul Arellanes said.

There will be home games against high-powered teams such as No. 4 Fresno City College on Sept. 20 and No. 5 Santa Rosa College on Oct. 8 and they will meet in Santa Rosa again Nov 5.

Santa Rosa College isn’t the only team from the Big 8 Conference that could be a challenge for the Beavers. Sierra College, ranked No. 7 in the state, will come to American River Oct. 4 and the Beavers will travel to Sierra Oct. 29.

ARC will face off against No. 12 Cosumnes River College at home Oct.15 and at Cosumnes Nov.13.

“I try to put together a challenging schedule. We have 19 official games we can play in and 16 of those 19 games are against teams who made the playoffs last year,” Arellanes said.

This season will not be easy for the Beavers as they seem to be going through a rebuilding process. They will have many challenges to face, but it’s how they handle it together that will determine how they finish the season.

The bridge of beaver spirit