Sophomore Hannah Hardy and freshman Ariel Maroon look to provide a spark for the women’s track and field team during the Nor-Cal Championship and State Championships.

On a sunny weekend at American River College’s Beaver Stadium, the women’s track and field team prepare for their last home meet of the season. Sophomore Hannah Hardy and freshman Ariel Maroon are both strong candidates to claim State titles in their respective events. At one side of the stadium, Hardy prepares for the long jump. Directly across from her, Maroon attempts her first vault of the day. Both athletes are looking to improve on their personal bests. 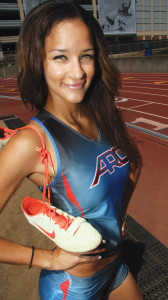 Hannah Hardy was named the 2013 Most Valuable Field Athlete in the Big 8. This season Hardy won the NorCal Heptathlon with 4,146 points and she broke the record in the triple jump by jumping 11.51-meters, a record that stood for 21 years.

Hardy
Sophomore Hannah Hardy began running track after taking a dance class with ARC track and field head coach Jeanette Allred-Powless’ daughter.
“I would go over and hangout at their house. They would run, and I would run with her,” Hardy said.  Afterwards, “My dad put me in club track for Roseville,” she said.
Hardy ran at Woodcreek High School, where she holds the school record in the long jump with a distance of 18 feet. Her personal best is 18 feet 7 inches.
Hardy’s record setting continues at ARC, where she currently holds the school record in the triple jump, a record that previously stood for 21 years. She also is a member of the record-holding 4X100 relay team.
Hardy competes in the triple jump and the heptathlon, an event consisting of 100-meter hurdles, 200-meter and 800-meter sprints, high jump, shot put, long jump and the javelin throw. At the 2013 Nor-Cal Championships, Hardy’s score of 4146 qualified her for the State Championship.
Head coach Allred-Powless is grateful for the attitude and talent Hardy brings to the team.
“It is so nice, because she always says, ‘Coach if you need me put me in.  Coach I’ll do this for points,’” Allred-Powless said.  “She scored 45 points in our conference championships…that is the second most in the history of ARC. To win four events, place second in one, third in two and fifth in another all in the same meet is kind of a big deal.
Hardy has several athletic scholarship offers from Division I schools including University of Hawaaii, University of Nevada Las Vegas, Arizona State University, California State University Long Beach and Boise State.
For Allred-Powless, the best part about having Hardy attending ARC is her growth.
“Watching her develop into the beautiful woman that she has become and her athleticism has been a major blessing,” she said. 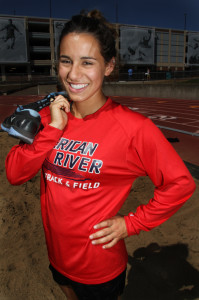 Freshman Ariel Maroon is the only women’s pole-vaulter on the team. She currently holds the second best pole vault in Northern California and in ARC history at 11 feet 8 inches. Maroon also holds the pole-vaulting record at 11 feet at Roseville High School.

“It feels good, but I know I have a lot of room to improve,” she said. “I’m just trying to do better, one step at a time focusing on the little things.”
Maroon would like to transfer to University of California Davis or Oregon State, but has work to do if she wants to get a scholarship.
“It depends on if I jump 12 feet this year. Usually after 12 feet 6 inches people start calling,” Maroon said. “So we’ll see. I got a while.”
Allred-Powless believes she can do better this year and will continue to improve next season.
“I don’t see any problem with her clearing 12 feet. Hopefully she can get 12 feet 3 inches, maybe 12 feet 6 inches,” Allred-Powless said. “That’s where she’ll get more scholarship offers. She should have no problem with a four-year scholarship athletically.”
Maroon has a wide history with sports, having competed in gymnastics for 10 years.  In high school, she participated in basketball, tennis and cross-country along with track.
“After I quit gymnastics they said I would either be good at [pole vaulting] or diving. I decided not to go into water,” Maroon said. “I just didn’t want to dive into water. I thought it was kind of scary.”
Proving that Maroon is a leader on and off the field, Allred-Powless said, “She is our 4.0 student athlete that people look up to. She’s been around for awhile and she is very organized. [Maroon] does a great job leading the team and leading the other girls with a real good positive attitude.”

Be the first to comment on "Reaching new heights"