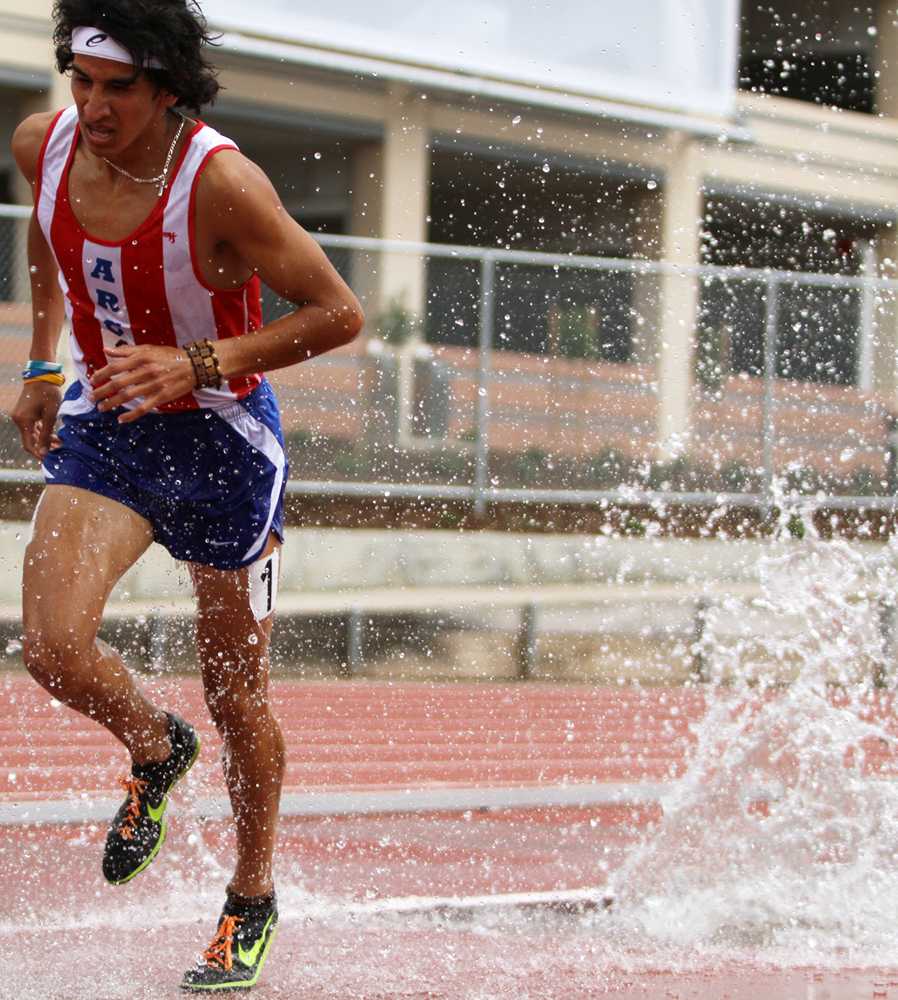 Luis Luna running in the steeplechase race at American River College on Apr 6. He is ranked third in the state in this event. (Photo by Daniel Romandia)

The American River College Track & Field team hosted their second home meet of the season on Friday, April 5. Dubbed the American River Invitational, the meet was a two-day event and proved to be a pivotal turning point for the team.

The team has had somewhat of a down year after performing exceptionally well over the past two seasons. The team believes their strong showing at the American River invitational will be a catalyst for a quick turn-around and strong finish to the season.

“We’re starting to really look a lot better,” freshman runner Riley Ruppenthal said. “I think now that it’s started to get to the end of the season, everyone’s starting to rally.”

Ruppenthal and his teammate Jacob Huston have set new personal records [PR] in the 1,500-meter run. Huston finished eighth over all.

“A lot of people PR’d. It went really well. Overall it was a fun meet,” said Ruppenthal.

The improvements are partially attributed to head coach Rick Anderson’s training style. His teams are known for drastic time improvements.

Anderson acknowledged the fact that this year’s team has some lofty standards to uphold and believes that may be a significant difference down the stretch this season.

“The last couple of years, we’ve had very good sprinters,” Anderson said. “Our 100m-200m, and 400m guys are just not what they were the previous years.  They’re not bad, but they’re not guys that can score at the state [championship] level.”

The team’s confidence in its long-distance events, however, have not waivered.

“We should have two or three guys in just about every distance event,” Anderson said.  “Most of them should make it to the state championships.”

As the season begins to wind down, Anderson has moved his focus to getting runners to their best times so they can compete in the Northern California and California State meets.

Anderson recently moved freshman Luis Luna into the steeplechase where he has seen great success.  This is Luna’s second time competing in the steeplechase, after beating out fellow Beaver and state champion Derek Woodard.

“By no means are we ready yet, we’ve got a long way to go, “ Anderson said.  “Some of the guys we’ll try to get to run as fast as possible by the NorCal’s, but the other guys like Luis [Luna], Jake [Jacob Huston], Matt Lozancich will aim for the state championships, because that’s were they should be.”

The Beaver’s next home meet will be at the NorCal championship trials. They are scheduled to take place on May 4 at 12 p.m..