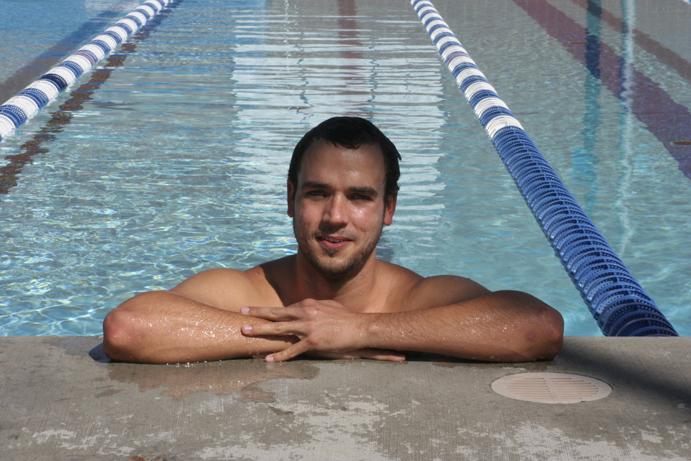 Scott Stirling of ARC man’s swimming team before his warm up on Mar. 4, 2013. Stirling is in both the swimming and water polo teams here at ARC. (Photo by Stephanie Lee)

A look at sophomore  swimmer Scott Stirlings transition from growing up in Zimbabwe to swimming for the American River College Men’s Swimming team.

America is a country of immigrants with different purposes. Many will come to find a job. Others find it as an escape route from violence in their home countries or religious freedom. Sophomore Scott Stirling, however, immigrated to the United States to further improve his skills in swimming, his life-long favorite sport.

Stirling was born in the southeastern African country of Zimbabwe. He was raised with three older sisters, whom now reside in separate sides of the world.

His older sister, Michelle, moved to Australia shortly after high school, and his other sister, Sheena, moved to Sacramento years before he made the eventual move himself.  As children, however, they all had one thing in common: “We all swim since we were little. I started when I was about five years old,” Stirling said.  “We are all a family of athletes.”

His mother has been a swim coach for 25 years and his father played Rugby. “My dad was very fast,” he said.

Speed is something he is now known for. He continued to swim and play water polo, despite living in a country obsessed with soccer.

“The African population loves soccer,” said Stirling. “But people with European descent, like me, play sports such as cricket and swim.”

Zimbabwe’s poor economy makes it is tough to find a job. His older sister, Sheena, made the decision to move to Sacramento and encouraged Scott to come live with her after he finished high school.

Stirling liked the idea, and quickly enrolled at ARC. He joined the water polo team and the swim team.

The culture shock made it hard for him to adapt in the first six months.

“Everything here is different,” Stirling said. “The weather is a lot colder here. It rains in Zimbabwe, but it can still be 100 degrees outside. And the food is worlds apart.”

Swim coach Erick Black has seen Scott mature into a fine 500, 200 and 100 yard free-styler, but recalls his fitness was not up to standard when he first arrived.

“He was very talented, but was unfit,” Black said. “When he first came, he did his best to get in real good shape, and that hard work has paid off for him,” said Black.

Teammate Bob Bralley praised his leadership qualities. “He is a really strong individual,” Bralley said. “He is the guy you want around the team. He is a very intelligent guy, too. Everyone listens to him.”

Stirling’s goal is to earn a sport scholarship to a four-year university and obtain a degree in International Business. He hopes to move back to his native land in the future.

“Swim has always kept me on my toes,” Stirling said. “It runs in my blood. “

Be the first to comment on "Treading through foreign waters."