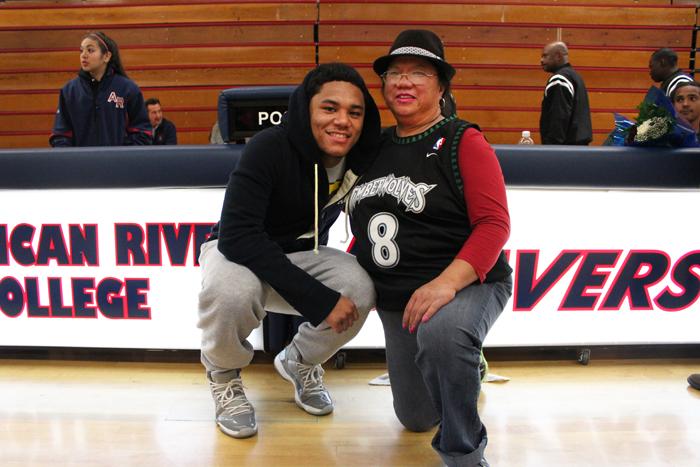 The relationship between ARC basketball player Chris Carvin and his mother, who’s been there through his success and triumphs.

Being a single mother can be challenging, especially when it comes to finding time to spend with your children. Often, mothers will be grateful to share a few moments with their kids. For American River College sophomore men’s basketball guard Christian Carvin and his mom, Gloria Gunabe, mere moments are not enough.

“I’ve missed one game in his career,” Gunabe said. “I know his schedule in and out. I have print outs of everything. I’m self-employed so I plan my schedule around him.”

Growing up in San Francisco, Calif., Carvin was born to play basketball. He started messing around with the ball when he was 18 months old. His Mother knew there was something special about him and she passed that belief on to him.

“It’s the best type of God given relationship,” Gunabe said. “I have faith in him and he has faith in me. My faith in him is to do what’s right and what is good, and his faith in me is [knowing] I’ll always be there for him.”

Gunabe has always been her son’s biggest advocate. She started her own business to ensure that she would never miss an opportunity to help him achieve his goals on and off the court.

Carvin and Gunabe have made their impact on the team. Carvin is averaging 11.2 points, nearly seven assists, and almost two steals per game this season, while Gunabe helps keep him rational throughout his games.

“I don’t know where I would be without my mom,” Carvin said. “She’s my number one fan. Sometimes she yells stuff that clicks with me and she helps get my mind focused.”

Some successes Carvin has obtained on the court are earning a full-ride scholarship to Cal-State Fullerton and being one of eight players from Sacramento nominated for the McDonalds All-American award in 2011.

Having significant success can sometimes go to a person’s head, but Gunabe helps keep Carvin levelheaded.

“With notoriety comes accolades,” Gunabe said. “Accolades can bring an inflated ego. So I have to control that inflated ego. I go back to what his grandfather and grandmother would expect of him.”

Carvin ended up returning to Sacramento from Cal-State Fullerton when his father’s health started failing. Despite Gunabe’s feelings for the matter, she didn’t object to her son’s decision.

“Regardless, I have to support whatever decisions he’s made, even though it’s against what I think. I’m there to support him whichever way the dice rolls,” Gunabe said.

It was a trying time for Carvin when he first came back to ARC after sacrificing his full ride scholarship, but he doesn’t regret his decision.

“Honestly, I didn’t second guess it at first, but when I came home, I really wanted to get out of here,” Carvin said. “But it was for my dad’s health, so I really don’t have any complaints.”

He hopes to achieve another scholarship to a four-year university and eventually move on to the professional level.

No matter where Carvin goes in life, Gunabe will still be cheering for him. Her hope for him is to reach all of his goals in life and to give back to the people who have made a difference in his life.

“My ultimate wish for Christian is to have a good contract somewhere and to have his own family at the right time to keep him grounded,” Gunabe said.

Carvin is proud of the relationship he and his Mom have built over the years, and is grateful for the sacrifices she has made to help him be successful.

“She’s my best friend,” Carvin said. “I’m with her everyday. I couldn’t imagine not seeing her.”