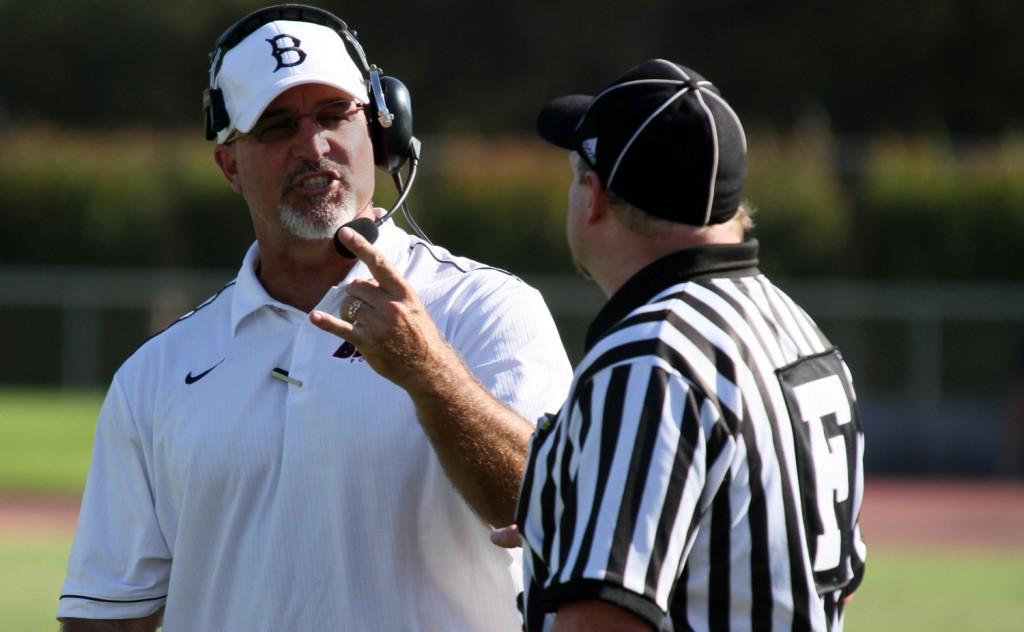 Jerry Haflich expresses his grievances to a referee at American River College during the losing game to San Francisco City College on Sept. 29. (Photo by Bryce Fraser)

It was a distressing week for American River College football coach Jerry Halfich and his team. The football teams loss to City College of San Francisco ended their 22-game win streak, but defensive back Rozale Byrd, a key contributor as a freshman this season, lost two people in a shooting.

After experiencing triumph on the field with a late game interception on his 19th birthday against Santa Rosa Junior College on Sept. 22, Byrd celebrated with a party at his parent’s home in south Sacramento. As the party was winding down—tragedy hit.

Byrd’s close friend, Dijon A. Smith, 19, and his uncle, Oscar Harris, 39, were both shot and killed on the sidewalk across the street from the Byrd residence. Smith died on scene and Harris died Sept. 28, according to Sacramento County Coroner’s reports.

No arrests have been made, according to Sacramento Sheriff’s spokesman Jason Ramos.

Ramos also stated the shooting occurred across the street from Byrd’s home. Smith’s body was found around 200 feet away from the house, near the 7600 block of Countryfield Drive.

Several people were outside tending to the victims when the authorities arrived, and dozens of partygoers were detained and questioned, according to a press release from the sheriff’s department, which also stated that no motive has been determined and no suspect(s) have been identified.

But the loss and grieving for one of his young players did hit close to home for the Beavers the week before the biggest regular season game in school history.

“It’s right in our own backyard,” Haflich said. “I told the rest of the guys, ‘it could have been any one of you guys.”

Haflich remains adamant the shooting was not a distraction for his team in preparation against No. 1 state ranked City College of San Francisco Sept. 29—just six days after the shooting occurred.

“None of that event really spilled over into our world of practice and game preparation, I didn’t feel like it was a distraction,” Haflich said.

Byrd, in a collective decision, according to Haflich, suited up and played. He recorded five tackles and forced and recovered a fumble in the loss.

“It’s always good to have him around,” Haflich said.

Haflich sat on the sideline after the game when his daughter Whitney came over sat next to him and gave her dad a hug.

As the head coach for the last six seasons, the imposing leader of the Beavers doesn’t deal with losses very often.

And nearly two calendar years since the last one against Sierra College on Oct. 2 2010, a hug from a daughter can put it all into perspective.

The loss, 52-33, to the defending state and national champs ended a nation-best 22-game win streak for ARC.

The longest streak in major college football was 47 games by Oklahoma in the 1950s and the University of Mount Union Ohio had a 55-game win streak in the early 2000s. Sierra College won 37 consecutive games from 2002-05.

Before the game, Haflich said the game was the biggest in program history saying it was a “pecking order game for us” and “it will tell us where we are at.”

Other than the ending of the streak, the Beavers are virtually where they were before the game started.

The loss was a non-conference game to the top team in the nation. In JCFootball.com’s national rankings, the Beavers dropped one spot to No. 13 in the loss.

On Rivals.com top-30 rankings, CCSF moved up three spots to No. 3 with the win over the Beavers.

ARC still has a shot at a postseason berth. The most important thing to Haflich and the Beavers is to win the conference and get a shot at the state title.

If the Beavers claim the Valley Conference title and San Francisco wins the NorCal title, the two teams would meet in a rematch in the state title game in December.

“Our team goal is still the same,” Halfich said. ”We would love to win the Valley Conference. It’s a tough test versus five very good programs. We have to play well and limit mistakes. We won’t win a game with five turnovers.”

Players, on the other hand, were not as politically correct about the want at a second shot at the Rams, after CCSF players refused to come to midfield after the game and shake hands with ARC players, which is the norm in college football.

“We just need to win our games,” sophomore safety Scott Patalano said. “And most likely they will win all of theirs and we will see them in the championship and get our revenge on them.”

The Beavers travel to Stockton to play San Joaquin Delta College (X-1) on Oct. 13 in the first Valley Conference game for ARC after moving up from the Mid-Empire after last season.