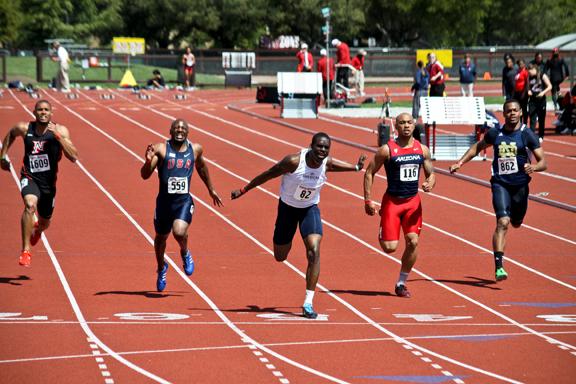 American River College sophomore sprinter Diondre Batson, center, crosses the finish line of the 100-meter race at the Stanford Invitational on April 6 in Palo Alto, Calif. Batson (10.27 seconds) set a school record in the race, and also set the school record in the 200-meter (20.53) on April 13 in Walnut, Calif. (Photo courtesy of Rick Anderson)

The meet was on the first weekend in April on the 6th and 7th.

The Invitational was as important to the Beavers as any other meet, said head ARC track and field coach Rick Anderson, but this one let “us show off our top athletes in front of hundreds of schools. It also gives us a chance to compete against some of the best athletes in the country.”

Batson again beat the competition “handily” by two tenths of a second in the 100 and broke his own school record with a time of 10.27, a record Anderson thinks, ”Will be broken several times again this year.” With that time Batson hit the Olympic “B” Standard, which makes him eligible to compete in the Olympic Trials in June.

The top competition is part of the reason why Batson was able to get into the 10.2 times, times he told me back in March he would be able to reach.

Easing up at the end of the race seemed to be no issue for Batson as the competition really motivated him.

“He did get up more for this meet,” said Anderson. “This is the first time all year I saw him actually lean at the finish line trying to milk every 1/100th of a second out of his body.”

Anderson thinks that Batson actually could have gotten off to a better start in both events meaning potential bad news for his competitors and even better times. “I never say never, but I doubt the records he sets will be broken in my lifetime.”