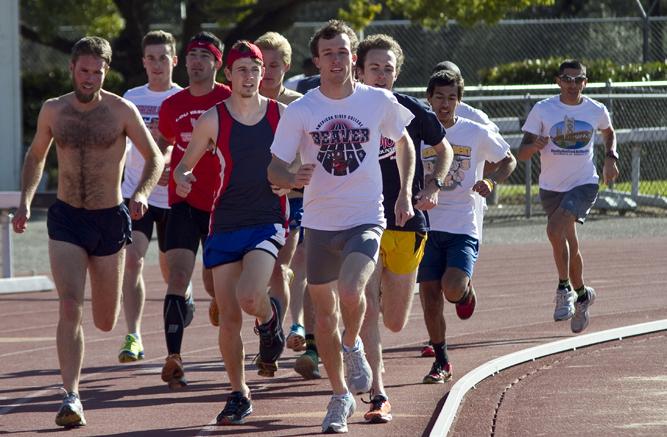 That’s how long it had been since the American River College track and field team won their first state title during last year’s championship run that included a sweep of conference, Nor Cal and state titles.

“You go 60 years at this school, 60 years of track teams without ever winning one,” said head coach Rick Anderson, “And then we win one. Now we’re hungry, we want to keep winning (state) over and over.”
Winning over and over is what the Beavers did last season sweeping all their conference meets all the way to the close finale at the state meet edging out Mount Sac.

Confidence on the team ran high. “We knew if we lost, it wasn’t because someone was faster than us,” said Bracin Walker, long jumper and integral part of the team the past two seasons, “It was because we didn’t execute.”

Anderson shared his confidence saying that he knew they were going to win conference and Nor Cal and that “nobody would touch us” until they reached state.
What is expected from the coach this season? Does he expect the students to start out where they left off last year?

“I sure hope so, we’ve got the talent for a very strong team,” said Anderson, “I think with the guys we have coming back and the success of cross country showing the depth of our distance runners, I think we definitely have a team that’s in contention for the state championship again. Whether we win it or not is another story.”

The success for that cross-country team was their own state title in 2011. Returning sophomores from both championship teams include Garrett Seawell, who was the state cross-country individual champion and state record holder in the 5000-meter event. Wyatt Landrum and Matt Airola, also returners, finished third and seventh in state in cross-country, respectively.

“I can tell you we are going to score a lot of points,” said Anderson. “We are very deep because we have just about every event covered.”

Other strong returners and potential point scorers include sophomores Josh Gruver and Diondre Batson. Gruver is expected to have another strong season in the Steeplechase, after a sixth place finish in state last season. Batson, who anchored the state champion with 4X100-meter and 4X400-meter relays last year, also holds the school record in the 100-meters is expected to have a monster season this year.
“Watching him run,” said Anderson of Batson, “he could even be one of the best 400-meter runners in the country.”

With all the success and talent on the team one would expect Anderson to feel like it was a championship-or-bust team this year but that’s not the case. Anderson said he never looks at the season like that, but it won’t sway his confidence. “I think we can score as many or more points in the state championship this year than we did last year.”

Anderson is confident in his team and he is not worried about what the other teams will throw his way. “Will we win state? No idea.” Said Anderson. “We’ll score a lot of points and if someone scores more than us we don’t win. But someone will have a tough time beating us.”