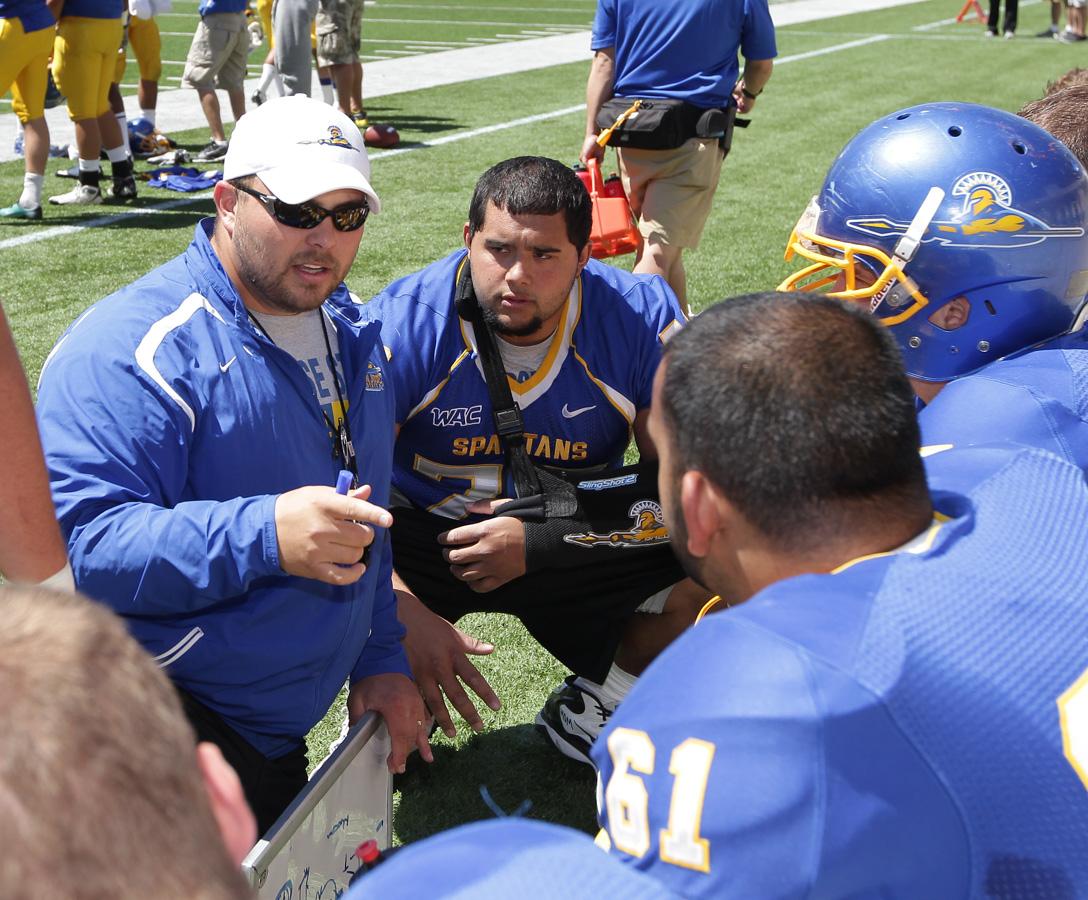 American River College alum Klayton Adams has gone from an undersized center on the football team to an assistant coach at a Bowl Championship subdivision program in less than a decade.

Adams played for the Beavers in 2001-2002, garnishing an all-conference nod as a sophomore.

Last month, Adams made his debut as the tight ends coach for San Jose State University. The timeline and accomplishments Adams has displayed since his days as a player at ARC have always been attributed to his ability to work harder than his competition.

“His work ethic has got him to where he is today,” ARC assistant football coach Brian Airoso said.
Adams and Airoso played football together at Sheldon High School in Sacramento and at ARC during the 2002 season. The two coaches are still friends and have kept in contact, especially now that Adams is a lead recruiter for San Jose State University in the Sacramento area.

“He calls me on (our players),” Airoso said.

Since his senior season at Boise State, where Adams was a second team all-conference selection at center, Adams was unsure of his professional career. He stated that he had dabbled in sports radio in Boise and did a weekly segment on the ESPN radio affiliate during his senior season with the Broncos—but coaching was still not on the radar.

“I was thinking about getting into radio or TV,” Adams said.

Yet, he wasn’t completely content on that being a career, either.

“A lot of players know that when you are done playing, you go through this kind of empty stage where you don’t really know what you are going to do and you are trying to figure it out,” he said. “And that is where I was.”

That all changed when Adams was approached by Boise State offensive line coach Chris Strausser about starting out as a student assistant to the coaching staff with the Broncos. Strausser coached Adams at Boise State during the two seasons he played there when the Broncos went a combined 24-2.

“I asked him to stay on as an undergraduate assistant,” Strausser said. “He had a great understanding of the game and if he was a guy that wanted to be a coach, he had a chance to be a really good coach.”

When Strausser officially asked Adams to join the program as a coach, he said Adams took all of about six hours to call back and say, “I’m in.”

“I had no interest in doing it or really thought much about it. Coach Strausser had kind of mentioned that he wanted me to come help out in the spring. I was interested in it and really enjoyed it,” Adams said.

Adams began as a student assistant with Boise State in 2005, and was a graduate assistant in 2006. As a GA, he was responsible for schemes and helped running practices leading up to game day.

Since then, he has spent two seasons at Western Washington University as offensive line coach and run game coordinator. Adams then spent six months at the University of Washington as an assistant before being offered a job in his hometown.

Adams spent the last two seasons at California State University, Sacramento as an offensive line assistant coach and was the offensive coordinator last season for the Hornets—a position that Adams attributes to another step in his progression in coaching.

“I enjoyed it when I was doing it,” Adams said in regards to his control of the offense at California State University, Sacramento.

“And I think it made me a lot better as a coach.”

A quick progression for someone who was uncertain of this profession only six years ago—despite his friend and former teammate Airoso thinking it may be a bit of an aberration.

“I knew he always wanted to go into coaching. I think that’s why he and I bonded because we both wanted to get into coaching,” Airoso said. “He is always finding ways to make himself better. His work ethic has gotten him to where he is today.

The transition for Adams to San Jose State University has been a rather easy one, saying, “It was pretty evident that (San Jose) is pretty close.”

Adams is married to his high school sweetheart; they now have a daughter and are expecting their second child. The decision to go to the Bay Area was factored on the proximity to Sacramento for his family.

“My wife’s family is (in Sacramento), so they spend some time there when I am out of town,” Adams said.
As for his future as a colligate coach, Adams says he hasn’t looked that far, instead stating his mind is focused on the Spartans’ next opponent.

And whether or not he has aspirations to be a head coach in the future, he simply says, “I don’t know, we’ll see.”

Beavers geared for first Valley Conference test on the road

Be the first to comment on "Leading from the sidelines"