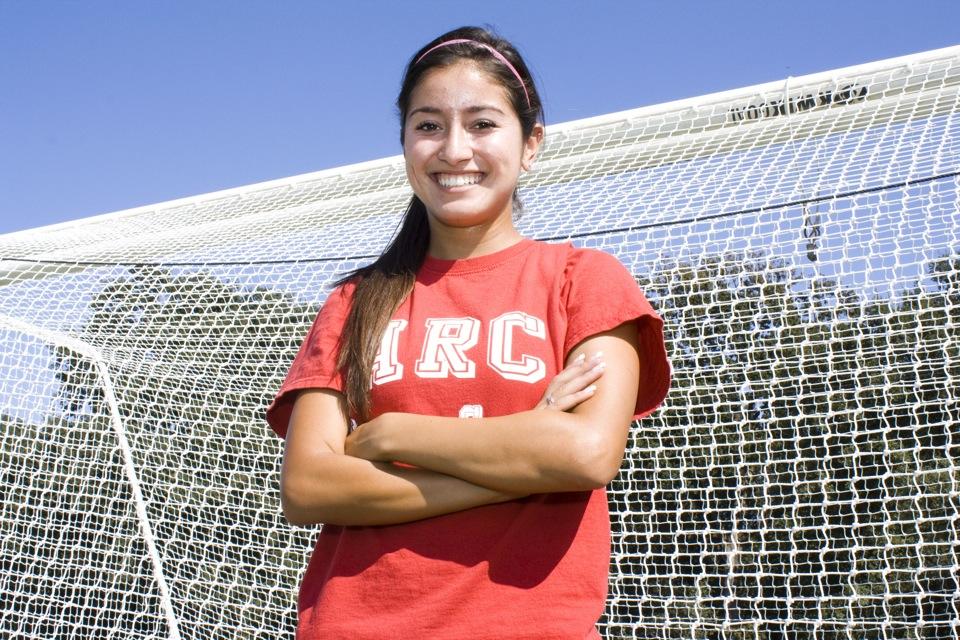 Sophomore Erika Jarillo stands in front of the goal on the soccer field. Jarillo plays defense as an outside back on American River College's women's soccer team. (Photo by Bryce Fraser)

Erika Jaramillo may be a pint-sized player, but she knows how to pack a punch out on the field.

Being undersized could be discouraging to some people. To Erika Jaramillo, a sophomore on the American River College women’s soccer team, it’s an advantage to be underestimated.

Born and raised in Elk Grove, Jaramillo started playing soccer when she was very young. “I’ve played since I was four years old,” she said. A standout player for her West Campus High School, Jaramillo made the All-Conference team all four years of high school.

After enrolling at American River College in 2010, she became All-League as a freshman playing as an outside back, a position on the defense. Jaramillo is responsible for providing support for the goalie, making runs, communicating with the team and keeping the ball out of the net. “Erika’s a good leader and team captain,” said Coach Paul Arrellanes. “We’re expecting a lot from her this year.”

After making it all the way to the quarterfinals a year ago, Jaramillo feels like they have some unfinished business. “Losing in the quarters last year gave us a reality check. It showed us a different perspective and all the returners saw that we had work to do to get further,” she said.

She considers all the coaches she has had as influences in her game. “The club coaches taught me a lot about defending while our coach here, Paul, has taught me about attacking.” Jaramillo hopes to get a scholarship to a good division-two school next year.

Soccer isn’t as punishing a sport on your body as football or baseball, but it is no less demanding. In soccer there is so much full sprinting to get the ball, make a pass, or attack, that it really demands an extreme amount of aerobic exercise. A good soccer player really does need to be very well conditioned and have great cardio to excel in the sport.

Even though she stands out on the field with her play, Jaramillo finds it difficult to be noticed by some of these schools due to her small stature. “The schools all want big tall girls,” Jaramillo said. “So it’s hard to get noticed.”

The coaches here don’t seem to mind how tall she is, but she feels that other coaches see it differently. “The coaches at four-year schools focus on it too much; it’s definitely something I’ve had to overcome.”

It helps to have tall defenders, but Jaramillo shows it’s not a necessity. “I use my height as an advantage,” she said. “A lot of girls underestimate me for my shortness.”

After starting the year off rolling with a 5-1 win over Solano and a 7-1 win over West Valley College, Jaramillo notices the team chemistry building. “We are definitely making it to the final four,” she stated with confidence. “Playing our way and doing it like that is the ultimate goal.”