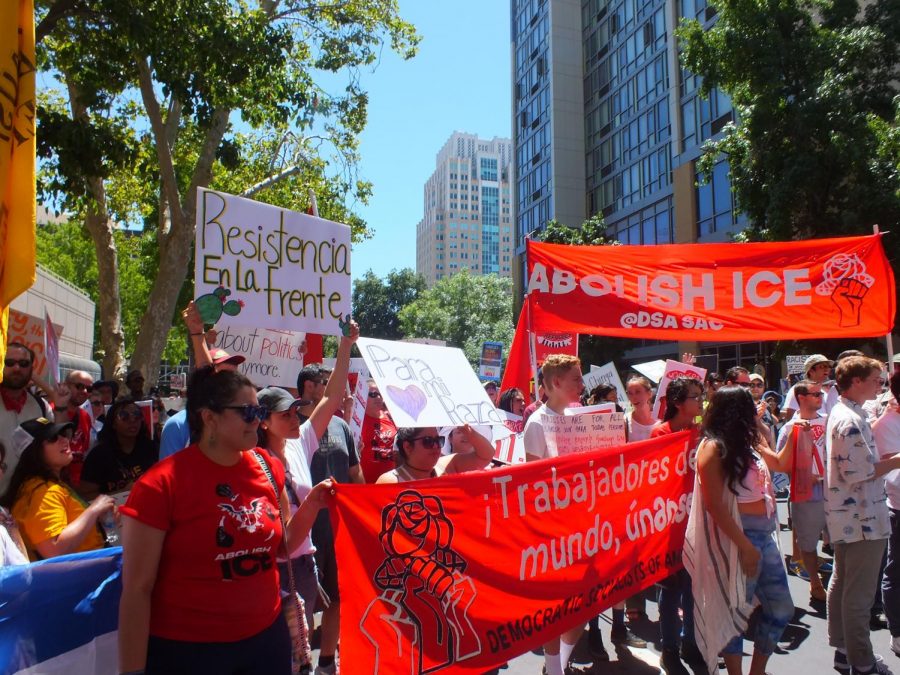 Immigration activist advocating for DACA reinstatement, ending the incarceration of immigrant children seeking asylum and carrying signs reading “Abolish ICE” convene in front of the Sacramento County Sheriff's Detention center in Sacramento, Calif. Sacramento County works directly with ICE to remove undocumented immigrants including Dreamers without DACA and those without immigration status, a clear contradiction to the states mandate for law enforcement not to work with ICE. (Photo by Irvis Orozco)

Undocumented students, also known as Dreamers largely felt the angst of the presidential elections according to Sacramento City College counselor Sandra Guzman, who works with this community. This election largely determined if Dreamers would remain in the country or would have to forfeit their protective immigration status. Joe Biden, the new president-elect, has said that he would act with an administration executive action granting the Deferred Action for Childhood Arrival back to Dreamers on his first day in office.

This is in contrast to several pending lawsuits filed by seven states and President Donald Trump’s administration that could be set in place at the Supreme Court. The Supreme Court decided earlier this year to send the lawsuits to lower federal courts and for them to make decisions to uphold the program. These outcomes could hinder prospects in DACA staying in place and how the Biden administration and a Republican-led Senate would act on any immigration reforms.

DACA is a President Barack Obama administration-era created a program that has given more than 700,000 young people brought to the United States as children with no legal status the chance to stay in the country and work in the U.S., according to the Department of Homeland Security.

DACA, which has been in place for eight years, allows certain young people who came to the country under the age of 16, who’ve studied in the U.S. and who have gone through a lengthy background check, the chance to apply for a temporary protected status from deportations and a  year-long legal work permit, according to the U.S. Citizenship and Immigration Services. DACA does not come with a pathway to citizenship.

In October, Brian King, Los Rios Community College’s district chancellor, sent a district-wide email about the potential of immigration raids coming to the Sacramento community. This is as the Trump administration has vowed to continue targeting sanctuary cities with an increase in immigration enforcement, according to the Washington Post.

“Since Sacramento is a city that could be targeted, it is important that we continue our work to ensure our undocumented students understand what supports are available to them and how to get help if they need it,” King wrote.

In its efforts to help these students, LRCCD has joined the state chancellor’s community colleges and many other partner universities to provide resources for undocumented students by conducting a series of online workshops. These workshops titled, Undocumented Student Weeks of Action, concluded in early November and were meant to help undocumented high school and current LRCCD students navigate the resources that are available to them through the district. Workshops are still available online and students can still speak to counselors about each session.

Sandra Guzman, Sacramento City College counselor, coordinated some of these online workshops. Guzman who has spent extensive time working with undocumented students while at SCC says she tries to encourage this often marginalized community to continue their educational goals despite facing numerous educational hurdles.

Guzman explained that her work helping immigrants was instilled by her family and church.

“I come from a mixed immigration status family, so I understand the struggle,” Guzman said.

Guzman said helping the undocumented community started when her family took a Salvadorian family fleeing civil war into their family home when she was 10 years old. Ever since she has been helping immigrant communities.

Guzman explained that these workshops range from financial aid, scholarship opportunities and California State University or University of California transfer aid. Guzman said that the process can be confusing for students because of the different requirements for undocumented students especially now since some undocumented students will be applying to universities at the end of November.

“The objective of every workshop is a little bit different, but the entire weeks [are] about helping undocumented students …and to introduce them to resources, like where to find scholarships, or how to apply for the California DREAM Act,” Guzman said.

The California DREAM Act helps pay tuition at community colleges and four-year universities. District-based scholarships are posted in January and applications are due in March, according to Guzman.

In addition to the Weeks of Undocumented Student Action workshops, students can engage in community building and additional resources at all four LRCCD Undocumented Resource Centers, including one at American River College, according to Guzman.

Students have access to educational programs like the Extended Opportunity Programs and Services that offer free legal assistance and the Puente Project, a counseling and mentorship program. The centers also have peer mentoring, counseling and advising and community building, according to Guzman.

“We also provide a great deal of workshops and mainly engagement in the form of clubs, fiestas, celebrations and these are part of just some of the resources,” Guzman said. “We can also partner you up with contacts within the universities you are applying to.”

There was also professional development workshop training for LRCCD staff members on how to better serve the undocumented community. These videos can still be viewed online.

Guzman said that the workshops were aimed at personal growth within the students.

There were also workshops for high school and new entering students on how they can apply to schools like ARC. An important workshop for high school students to consider was an informative session on the requirements to apply for college.

Under AB-540, students who have gone to a California high school for three years and have graduated can apply to pay for in-state tuition, according to the California Student Aid Commission. Under AB-130 and AB-131, those students can qualify for scholarships and receive the California College Promise Grant, which helps pay their community college tuition, according to the California Community College’s website. The U.C. and C.S.U. systems have their own applications for financial aid and scholarships set for undocumented students.

Some students have been left out of DACA altogether, because of eligibility hurdles, but as Guzman says, there are a lot of options still open to students without DACA.

Guzman points out another resource website, PHDreamers, that aids undocumented students into getting into graduate health careers in medicine. Undocumented people in the state of California are allowed to receive many professional degrees and licenses, including licenses as barbers, cosmetologists and in law and medicine.

This comes as possible lengthy judicial arguments could still happen between the states that sued over  DACA and the Supreme Court that could hinder DACA remaining in place. This could play out within the next few months with possible lawsuits making it into the Supreme Court. The lower federal courts could also decide to rescind a more permanent status to DACA, as they have done in the past years.

The Supreme Court earlier this year rejected part of Trump’s wishes to eliminate the program. In a dissent by Chief Justice John Roberts called Trump’s move “arbitrary and capricious,” and sided with the liberal judges to reinstate the program. But as NPR puts it a lower court could still make the decision to dismantle the program and a law passed by Congress would be needed to make Dreamers into permanent residents.

But as Guzman points out, undocumented students can still continue to thrive.

“We have been here before there was ever DACA,” Guzman says. “I have a female student, who started as an English learning development student in 2008, way before DACA. I was able to meet her at 18 when she started going to SCC.  She thought all she could do was the ESL classes, but … she wanted to get a business degree and become a CEO of a business company.”

According to Guzman, someone told her student she could not become the CEO of a company because she lacked legal status. However, Guzman said the student found different ways to pay for her tuition and to stay hopeful. Eventually, that student went to school and paid it off working odd jobs and receiving scholarships, according to Guzman. This was before any immigration political reforms would happen under the Obama administration.

“This student originally paid for her tuition by having employment and scholarships… She never gave up on her hope,” Guzman said.

According to Guzman, the student eventually graduated from California State University, Chico and received a Master’s degree. This student is now a DACA recipient and works for the California Community College Foundation working on state measures.

Many undocumented students are stressed over the uncertainty of the election and a win for either party. Guzman said students shouldn’t let these hurdles stop them from achieving their goals.

“You must have hope to finish with school and make your dreams a reality,” Guzman said.