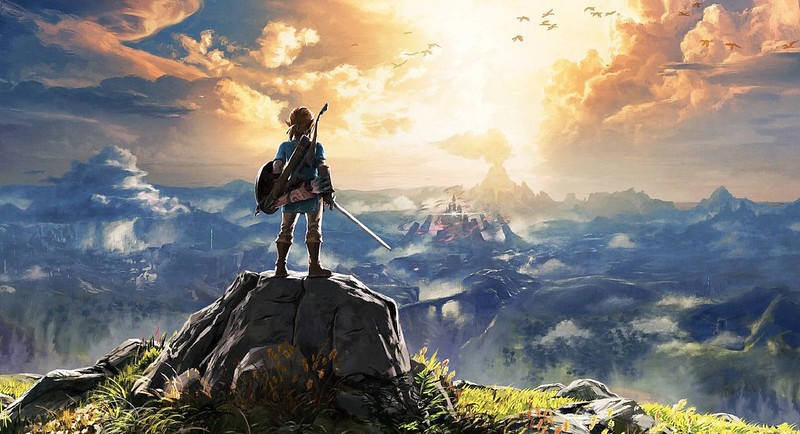 Video games are a good way to explore far away lands while staying at home. (Courtesy of Bagogames)

Some people still want social time, but COVID-19 is still a thing, so maybe isolation is a better route. Now that everyone is in quarantine, there are a limited amount of activities that can be done. Most people can waste their time watching TV or catch up on the book that people lie to themselves about reading. An option that people sometimes overlook is catching up on the medium that just gets better and better as time moves forward. That’s right, it’s videogames.  But there are so many games, over a variety of consoles, with expensive online subscriptions. So for the sake of brevity, online games won’t be discussed unless they are free, and most multiplayer games are out, because inviting people over may cause exposure to COVID-19.

10) The first is 2013’s “Grand Theft Auto 5,” which is a celebration of open-world action games.  This game follows criminals as they take on bigger and bigger heists, with side content all over the place. It has cars, guns, and is, to be perfectly honest, one of the best stress relievers of all time. Each heist gets more and more wild and explosive, and side missions vary from kidnapping celebrities to destroying ‘property for sale!’ signs. The characters are also very entertaining, with very funny dialogue, especially from Trevor, the meth-head character. The music is also decent as well (If “GTA5” isn’t appealing, “Red Dead Redemption 2” is similar but with cowboys, and the “Saints Row” series is similar but way funnier).

9) Want to know what’s annoying? Choosing one great game out of a bunch of iconic games is harder than dirt. So for this spot, it’s just going to be Playstation 4 exclusives. Literally most of the Sony exclusives are amazing. “God of War,” “Spider-Man,” The Uncharted Series,” “Ratchet and Clank,” “Bloodborne,” “The Last of Us,” etc. They are definitely worth playing, with various gameplay and genres, but all of them have very strong stories and are just so very fun.

8)  On the topic of “Bloodborne,” the Souls games are very unique. Mostly, because they are so difficult. Classic RPG tropes like gear, leveling up, etc. The combat is fair, but unforgiving with horrific enemies whose sole purpose is to eliminate the player. The games are mostly a large amount of trial and error, as making it through one run is near impossible. And this game is known for terrifying boss fights that push players to their absolute limit. The most recent of these games is “Sekiro: Shadows Die Twice,” which occurs in a fictional history during the Sengoku period in Japan. It follows a shinobi on a vengeance quest against a samurai clan that kidnapped his lord.  These games aren’t for everyone, but they are for gamers seeking a challenge.

7) Turn-based RPGs are for the patient, methodical players. Players who don’t have the patience to play “Pokemon,” “Final Fantasy,” or any other turn-based RPG have been long searching for the perfect turn-based RPG game to play that suits them. Is it “Final Fantasy XV?”  No, although it is a magnificent game, it will soon be replaced by the “Final Fantasy VII” remake, which doesn’t come out until April. Is it “Nier Automata?” It’s not really turn-based, multiple endings, and perverts would love it, but it doesn’t have that enduring longevity that other games have. “Undertale?” Everyone has already played it, and it’s far too short at seven hours to take up any meaningful amount of time (in all seriousness though, “Undertale” is amazing, with the best dialogue, entertaining puzzles, and it’s a bullet hell (a sub-genre of video games in the side-scrolling shooter genre, where the screen is littered in projectiles) turn-based RPG which is rare). The best turn-based RPG to pass the time with is “Persona 5.” The game takes place over two places: the real world and the Meta World, each with its own play-style. The real world is essentially a life simulator, and the Meta World is a dungeon crawling turn-based RPG.  Whatever happens in each world affects the playable character, Joker, and can alter his abilities in the Meta World, which improves him statistically in the real world. Then with his improved stats, he can befriend confidants who can help him in the Meta World. In the Meta World, each character has a persona which is a unique demon that they use for combat. The style is very jazzy and colorful, the gameplay is explosive, and can entertain the most reluctant of players for 100 hours of possible gameplay.

6)  Shooters follow a similar formula for every level. Kill enemies, go forward, hide behind cover, and then kill more enemies with every other mission using a vehicle or a certain mechanic. It gets old very quickly. This changes with every gaming company throwing their own personal hat in the ring. What if players killed Nazis that won WWII?  What if it was in the far future, and the Halo needs to be prevented from being activated! Oh no, aliens! Grab the ‘roided out, protagonist!  But unfortunately, it still follows the cover, kills, forward, repeat format. This changed with Id Softwares “DOOM” of 2016. Movement is life in the game, if the player hides, they will get the game over screen. The game follows the Doom Slayer (formally the “doom-guy” in the original games) as he rips and tears through Hell’s denizens as they take over Mars. The game is brutal, fast-paced, requiring movement, and it is one of the few cases of a gory game with a twisted version of slapstick. There is a chainsaw, upgradable guns, and a killer soundtrack created by composer Mick Gordon. This game is gory and not suitable for younger audiences, but boy is it fun. The sequel, “DOOM ETERNAL,” was released March 20, and is even more difficult than its predecessor.

5)  Action isn’t for everyone. Some people play games to release their tension, to dominate their friends to the absolute max, to get their minds blown with how realistic the graphics are. But the point of games is enjoyment, and some games are lower octane than others. A notable game franchise out of all of these is “Nintendo’s Animal Crossing.” It is possibly the cutest game ever made. The original game follows the player character as they get into debt from a friendly tanuki known as Tom Nook (dude is probably the evilest villain out of any video game, to be honest). The entirety of the game is spent getting out of debt by doing chores and errands for the other villagers, until the debt is gone. Then it’s up to the player what to do next, as there aren’t really any endings to the games, they just continue on. The most recent game offers more gameplay as the character starts off as the mayor of the town. The new game, “Animal Crossing: New Horizons,” follows a similar pattern but on an island. It was released March 20, the same day as “Doom Eternal.”

4) “Legend of Zelda: Breath of the Wild” on the Nintendo Switch, is not only an excellent game but is also a beautiful work of art. With quiet trinkles of its music littering its cell-shaded 5,300-acre map. There is no rush to this game, and players can literally go wherever in the game to find various content, from terrifying enemies to silly non-playable characters. The game is exploration incarnate, and players have been known to skip entire sections of the game to go to places where certain items are required to get through, just for the heck of it. This is the truest adventure game anyone can ever get.

3)  “Super Mario Odyssey” for the Nintendo Switch is plain, simple, pure, unadulterated fun. It is a platforming grabathon of a game where the player as Mario collects moons to move onto the next vastly different area. And each area has several different ways to tackle and conquer each area, all relying on each player to play using their own method. The game has a sweeping orchestra that fits the setting. There are a total of 999 maximum moons to grab, with 883 to just get the true ending. “Super Mario Odyssey” is an achievement in gaming that can appeal to literally anyone.

2)  “The Witcher 3: Wild Hunt” is one of those fantastically made RPG’s with deep lore. It’s offered on nearly every console, with different playing styles depending on the player, and it is one of the few games where the DLC, or downloadable content, is totally free. This game follows Geralt of Rivia, who is a witcher which is essentially a magic mutant bred for slaying monsters. There is a fantastic Netflix show related to the franchise, as well as a book series, but this game is one of those few games where it rewards the gamer for a chance to be played and it’s a worthwhile game to play.

1)  What qualifies as a good game? Is it graphics, gameplay or story?  No, it is playability that is the answer, how easy it is to get involved in a fun game while maintaining a difficulty that is hard to master.  “Enter the Gungeon” is such a game.  In this game, the player plays as a gungeoneer who must traverse, and later exit the gungeon.  As the name suggests, the games aren’t like classic dungeon dwelling games like “Legend of Zelda” or “DND” everything is gun-based.  The game is a top-down arcade bullet-hell shooter. Well the player uses guns against gun themed enemies(sentient shotgun shells with shotguns, a buff bird with a minigun, sniper shells with snipers, etc.) The game gets hard, with a monumental collection of guns, power-ups, items, etc.  This game remains memorable with its over-the-top boss fights, addictability, and replayability.  It is available for all consoles and PCs.