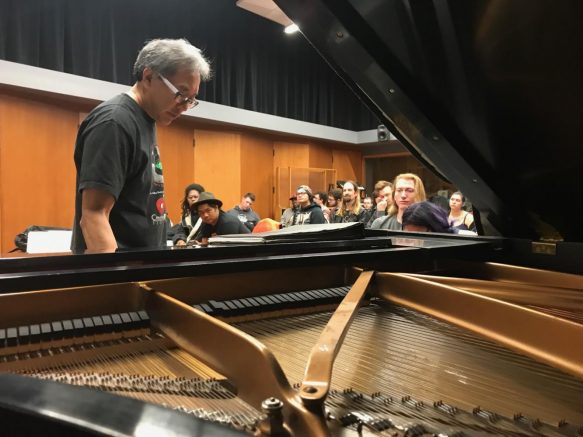 Chair of the music department Eric Chun teaches students how to write chord progressions during his songwriting class, MUSM 120, on Feb. 25, 2019 at American River College. (Photo by Ariel Caspar)

The music program at American River College, headed by the chair of the music department Eric Chun, is helping students delve deeper into their musical creativity and develop polished songwriting skills to generate all styles of music.

Nine songwriters have been selected from two songwriting classes in the ARC music department to perform their original songs for the ARC Acoustic Cafe, a series of three performances. The next performance is scheduled for April 11 at 12:15 p.m. in the Student Center during Beaver Week, and the last performance will be on April 26 in the Fine and Applied Arts building in Room 547.

The Acoustic Cafe will feature many styles of music, including rap, R&B and country. All performances will be in the singer/songwriter’s style with acoustic instruments, light percussion and harmonies. The performance will be in a recital format and is free to the public.

Chun’s classes, MUSM 120 and 121, have a strong focus on the technicality of songwriting, and center on what makes a song sound a certain way and how it all ties into the overall musical style.

The classes focus on every aspect of the song, such as scales, rhythm, keys and tempo. Many different pieces go into the creation of a song, and according to Chun, when every part is well-balanced, musicians have achieved the goal of commonality and have given the song meaning.

“Songwriting can be anything,” Chun said. “Whatever the topic of expression, whether it’s romance, love, depression, suicide, negative energy, jobs, cars — there’s no limitations to the song topics.”

Chun said his classes are conversational and loosely structured. Students are invited to share their input, ask questions at any time and Chun demonstrates many songwriting possibilities in his instruction.

Students are in a somewhat “School of Rock”-type setting while learning with Chun. His Tuesday and Thursday class experiments with blues writing, and students generate their own ideas and verses for Chun to perform as a demonstration of the songwriting process.

“As an instructor I have to be involved with some of the songwriting process,” Chun said. “Students will come [to my office] for evaluations and even cowrite.”

During class, Chun said students will learn to write songs in groups for projects and that students who find songwriting compatibility with each other will often collaborate and co-write songs together.

Linda Alvarez, a music recording major, is a first semester songwriting student and a featured performer for all the Acoustic Cafe performances.

According to Alvarez, she has worked on her song, “Berago,” for nearly a year now, and feels ARC’s songwriting classes have helped sculpt her song and bring it together with more precise rhythm and melody.

“Berago” is a song about her Aunt Kim’s old horse, of the same name, that had to be sold. Berago was a high-energy, Mexican dancing horse with unpredictable tendencies, Alvarez said. 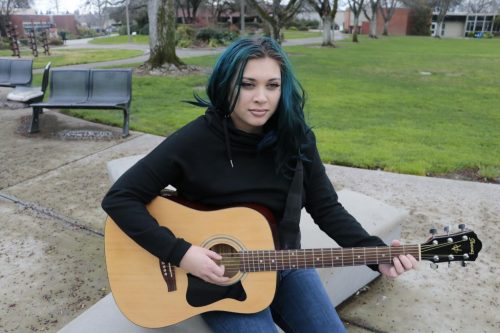 Music recording major Linda Alvarez prepares to perform her original song “Berago” for the American River College Acoustic Cafe on Feb. 28, 2019. Alvarez will perform on March 1, April 11 and April 26 for the ARC Acoustic Cafe in the Fine and Applied Arts building and the Student Center. (Photo by Ariel Caspar)

“[My aunt] loved this horse. He was so sweet and proper,” Alvarez said. “He would let you pet him, feed him, brush him, and as soon as you’d try to ride him he’d go berserk and buck you off. He bucked my aunt off three times!”

According to Alvarez, “Berago” is a fun, yet sentimental song that only her and her aunt can understand. They both cherished the horse, and the song reflects the deep bond that was formed.

Alvarez said her father taught her guitar chords at a young age and she began writing songs at age 13.  She said she is used to performing, but still deals with nerves.

“I always get nervous before performances,” Alvarez said. “It depends on my mood and [how] I’m feeling that day, but if I just close my eyes and forget about everything else and just focus on my song, then I’m ok.”

The more she performs, the more she learns, and Alvarez said she is appreciative of all opportunities given to share her original music with people.

“Every time I perform, it challenges me and I learn something,” Alvarez said. “I need all the experience I can get. That’s why I’m doing this.”

According to Chun, the Acoustic Cafe has been around since 2012. Chun said that this performance is not similar to an open mic night, and that all songwriters must audition and be an active student in the ARC music department, like Alvarez. This allows the Acoustic Cafe to maintain consistency and quality. Chun said he wants to achieve a talented, professional music atmosphere at ARC.

Chun also said that the performance is not a part of the music department’s regular concert series and that it is a unique circumstance.

“We’re supporting extra-curricular activities that students here can participate in while they’re taking music department classes,” Chun said. “It’s unique because it was a voluntary creation where I decided to formulate a way to serve the singer/songwriter talent at ARC.”