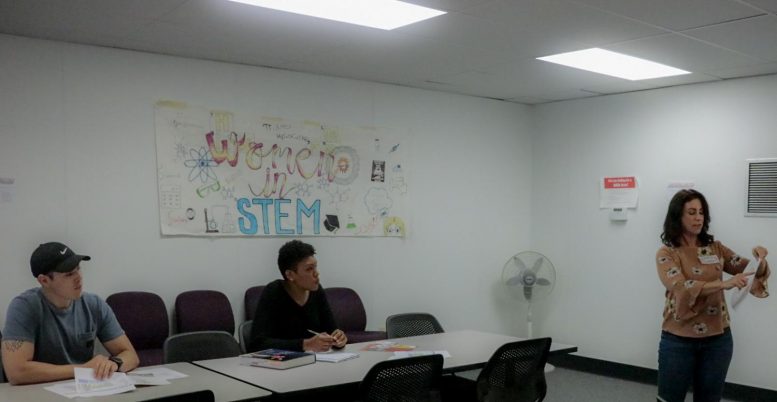 Students in the Women In STEM club during their bi-weekly meeting.

The smell of pizza and desserts filled the room as students and professors gathered in the American River College STEM, or science, technology, engineering, and math, building center for the first Women in STEM club meeting Sept. 28.

According to chemistry major and club president, Natasha Skidmore, the club seeks to empower women in STEM fields and give new STEM students support and a sense of community as they work towards a career in the field. The college will eventually expand its support for STEM students with a new three-story science facility.

“The Women in STEM club is a club for a women and men, but it’s supporting the idea that we need more women in STEM fields,” Skidmore said.

Although there have been some women who have paved the way, according to Skidmore, there are still students who don’t think working in STEM is a viable career option.

“We are trying to bring the idea that more women can be successful as STEM majors,” Skidmore said.

According to a 2017 report from the Office of the Chief Economist, women make up 47 percent of all jobs in the United States but hold only 24 percent of  STEM-related jobs. The OCE report also reported that women with STEM degrees are less likely than their male counterparts to work in a STEM occupation and instead work in education or healthcare.

Taylor Pratt, a kinesiology major, says she joined the club to receive information on becoming a successful STEM major.

“I feel like hearing background from professors and other students in the STEM area will make   me better equipped for my upcoming classes,” Pratt said.

Construction is underway on the new three-story STEM facility on campus and, according to Kirstin DuBray, the college’s director of donor relations, the new building will be beneficial for all STEM students.

“First we are raising money for a three-story STEM building and the second phase is to modernize the science wing,” DuBray said.

According to the STEM page on ARC’s website, private funding will be used to enhance the lighting, technology, and lab equipments used by students on a daily basis. This new facility will also offer students state-of-the-art wet labs for biology and chemistry classes.

The Women in STEM club welcomes all students and urges women and any new student considering a career in STEM to stop by the STEM center, according to Skidmore.

“We want new students to come here and feel welcome, you can meet friends at club meetings and we have free food,” Skidmore said.

The club gathers every first and third Thursday of the month and hold events for all STEM majors.

Students interested in joining the club can visit the STEM center located in Portable Village 603B. Students can also find more information on the ARC website.