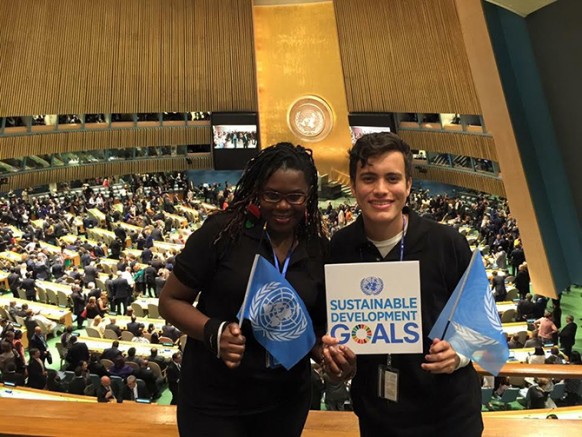 Edna Simbi stands with her friend Juan Pablo Celis Garcia at the United Nations. Simbi, a former ARC student, came to the U.S. on asylum in 2010. (Photo courtesy of Edna Simbi)

To some, graduating in less than two years with four Associate’s degrees and an honors certificate after taking 23 units at a time might seem insurmountable. For a young woman from Kenya, this seemingly insurmountable challenge became her journey to independence.

Edna Simbi grew up in Kenya, in abject poverty without any hope for opportunities beyond high school. Education is neglected for African women because of social stigmatization.

When the United Nations came to help her village, Simbi says she saw the opportunities and independence that an education could offer and it became her goal to work at the U.N.

“I saw what it did for people who were educated,” Simbi says. “The United Nations would come to my village and provide free blood tests, medicine [and] food. I saw that education empowers. I wanted that empowerment.”

Simbi says that for her, education paved the way to a better life, but pursuing it would be a painful and treacherous journey. For many African women, their education is sacrificed because of the belief that men must be educated to provide, Simbi says.

At the age of 24, she was forced to flee her home, she says. Simbi spent four years in exile as a refugee in Uganda then immigrated to the United States in 2010.

“Leaving was so painful, from a path that was equally painful,” Simbi says. “You ask yourself if you’re making the right decision.”

Simbi started American River College in spring 2012. She says that she graduated with four associate degrees and an honors certificate from the Honors Program in 2013.

Simbi says she earned her degrees in international relations, political science, social sciences and language studies all while working at the Student Center, a job she needed to establish residency.

Simbi was accepted into Columbia University and graduated from its School of General Studies. Simbi says the headquarters of the U.N. initially rejected her because she didn’t have a master’s degree.

Using the resiliency that got her through ARC, Simbi says she earned a bachelor’s degree in political science and a master’s degree in international affairs concurrently, graduating with both in 2017.

Simbi says she ultimately achieved her goal and worked at the U.N.

Cecilia Mayers, a student personnel assistant at ARC’s transfer center, says that just before she transferred, Simbi asked the transfer director if she could help other students with their personal statements over the summer because she wanted to give back to ARC.

To accomplish this, Mayers says Simbi enlisted her help even though it is not in her job description. Mayers says that Simbi’s trust in her ability left a lasting impact.

“For her to believe in me was very special. That’s not part of my job title. But her looking at me and saying ‘You can do it Cecilia’ gave me a lot of confidence in my writing,” Mayers says. “She gave me a huge gift.”

Kathleen Collihan, who teaches political science and international relations, mentored her. Collihan says that because of Simbi’s laser focus on working at the U.N., she was in the model United Nations club.

Collihan says she uses Simbi as an example of success in her lectures on the U.N.

“Her desire to give back, help out and make a better world will drive her,” Collihan says.

Although Collihan mentored Simbi, Collihan says she feels she received as much as she gave.

“I learned about the human will and human spirit,” Collihan says.

Simbi says that her source of inner strength comes from her faith.

“I give God all the glory for who I am, where I am and everything that happens in my life,” Simbi says. “I would have died several time over had it not been for the grace, the compassion and mercy of God.”

She referenced her favorite passage from the bible.

“Deuteronomy 28: 1-14 calls upon blessings that have been spoken of my life,” Simbi says. “Those are my blessings, those are the gifts God has given to me. I give God all the glory for my life, my successes – I owe God that.”

Simbi’s says her courage and faith in God helped her earn the education she aspired to as a young women with few options in Kenya. She says she attained empowerment, freedom and independence through education.

“Being in a position of power means that you can make decisions that affect even you, yourself,” Simbi says. “If you do not have an education, you are ignorant about a lot of things and other people make decisions for you and a lot of times they are not in your best interest.”

Simbi says she plans to come back to California to advocate and share a message with young women in similar circumstances.

“Just be true to yourself, pray, preserver and no matter how hard things get, you can never give up,” Simbi says.