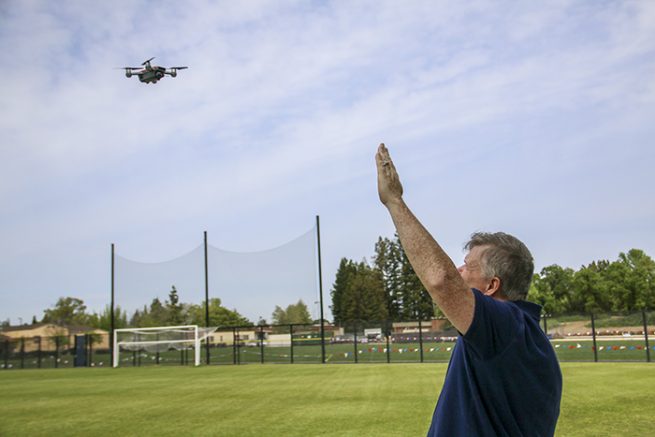 Shane Lipscomb lifts his hand to the sky in an effort to lock in to the drones smart capture, where the drone will follow hand signals, to get it to land without a remote. April 4, 2018. (Photo by Brienna Edwards)

A typical afternoon on any given Tuesday or Wednesday will find Shane Lipscomb, an Administrative Assistant, trudging across American River College’s soccer field, where he will soon be met by a small collection of students.

Inevitably they all assemble, standing together by the team bench, dropping their backpacks down onto its metal surface, it is here that they laugh and joke, and catch up on each others’ week.

However, it is not Lipscomb’s great love for ‘the beautiful game’ that sends them to the far reaches of the campus, because  in his hand he carries a small black case.

The case contains an unmanned aerial vehicle or more specifically, a drone, and this small group has gathered to fly it.

The Drone  club, for lack of a better term, originated a couple of years ago, said Lipscomb.

“There was a design student, who wanted to, as part of a project he was working on in class, design and print a drone, so he did,” Lipscomb said.

From there he and his fellow students began flying it as part of demonstrations on campus.

Not long after, “the technology met an ease to use and a price point where the school could justify purchasing a couple as design platforms,” he said.

“We had the drones, people were interested and Cheryl [Sears] lets us have the fields Monday and Wednesday at noon,” he said.

Sears works in Administrative Services at ARC, she is also the Operations Department; all flights must be scheduled and approved through her.

“Students can fly without a license if they are just flying for fun, or if they are flying in pursuit of some educational purpose,” Lipscomb said. If it is for a class, or simply for enjoyment a student can fly a drone campus.

“We have adopted the rule for specific authorization so while hobbyist could fly up to 400 feet here, we ask people to stay at the light level and below, at around 60 feet,” Lipscomb said.

In addition, if an aircraft is flying in the vicinity of the school and is visible, they will land their drones, and wait until it has flown over.

“Even though they are not gonna fly that low that doesn’t mean something might not happen to the drone that causes it to take off,” Lipscomb said.

However the location of the school poses some problems for flying.

“Because ARC is within five miles of McClellan [Air Force Base] and five miles within San Juan Medical, everytime we are gonna fly, for fun, we have to call them and let them know,” he said. 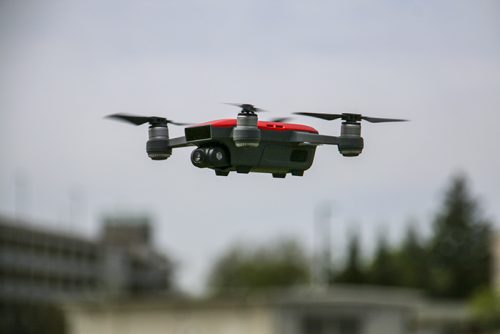 The Drone club gathers on the Soccer Field every Tuesday and Wednesday at 12 p.m. to fly their drones. April 4, 2018. (Photo by Brienna Edwards)

Although, this does not apply to commercial flights. The school already possesses a license to fly drones commercially, for any reason that could draw a profit, neither the air force base or the hospital needs to be informed, as long a licensed person is in attendance.

Both Lipscomb and Jason Wilkes, a mechatronics student and the remote pilot operations assistant, have remote pilot licenses and so all flights on campus would be supervised by one or both. They are the only two employees licensed and working with the Operations Department.

Since its inception, the club has gathered a small following of students from a multitude of majors.

Thomas Pfingston, a chemical engineer student, is still learning about drones and how to operate one.

Pfingston said he was in the Design Hub on campus one day when he began to speak to another student, Sean Franklin.

“He was doing some repairs, and I got interested in looking at [them],” Pfingston said. “And I just really wanted to see it come to life.”

Franklin is currently teaching Pfingston how to pilot the drone simply with hand movements, no remote required.

“This is smart gesture, smart capture, so it captures hand signals and images,” Franklin said. “It will recognize your hand, so it will do a couple of things, you can make it go farther away, bring it closer in.”

If the person were to make a box shape with their fingers, for example,  the drone will begin to record video; if he or she holds up two fingers in the form of a peace sign, it will take a picture.

The club is currently preparing to use the drones to film upcoming athletic events, however it is illegal to fly over people who are not part of the flight crew, so they are having to get creative.

This could be done in multiple different ways, the club can communicate with the athletic department to determine whether the athletes would be comfortable with a drone buzzing around them, following as they competed.

Or, for example, the track is surrounded by bleachers and wood paneling, meaning that the club could fly their drones over the wood paneling instead of over human heads.

It is Lipscomb’s goal for drones to be utilized across campus, and into other departments.

“I want to either have our own drones [on campus] or to operate a pool of drones that people can check out with approval,” Lipscomb said.