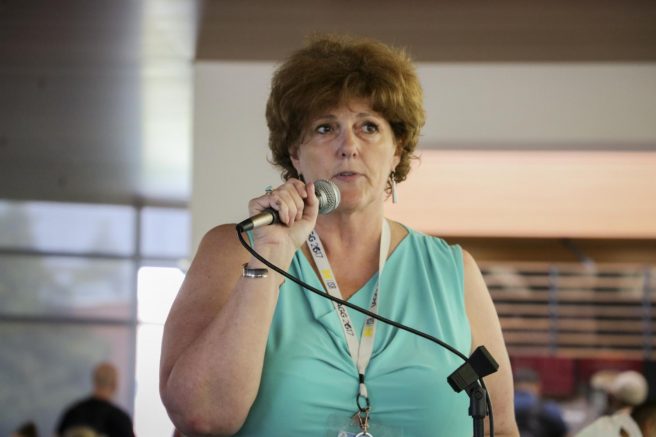 Professor Karla Gustafson gives a speech explaining the importance of the Gerontology Department at American River College on Sept. 9, 2017. (Photo by Ashley Hayes-Stone)

Professor Karla Gustafson, one of the department’s educators, took her time to explain what gerontology actually was to a crowd of students in light of common misunderstandings, as well as to advertise the wealth of opportunities provided by the department.

“You aren’t going to age like your parents did,” Gustafson said. “This is a different generation.”

The department, which is the only community college’s in the nation to be awarded the National Program of Merit Status by the Association for Gerontology in Higher Education, has been making an effort to popularize what it has to offer in their courses for some time.

This time, with rewards for contestants who only have to answer specific questions via email  leading up to the AGHE’s Nov. 18 conference, they’re practically giving things away for free.

Gerontology, according to the department’s page on ARC’s website, “is the study of adults at all ages.”

It is also the study of aging set apart from the social stigmas attached to the idea.

On Nov. 18, the gerontology department will be hosting a conference, and Gustafson encourages students to attend if they’re able.

The conference, which will include Google Cars and an overseas appearance from Japan by Paro—a robotic therapeutic seal—and its inventor, Takanori Shibata, is open to students.

Keynote speakers, educators and professionals in the field of gerontology will be present, and awards will be distributed to attendants who participated in a contest open in advance.

Such awards include unique USB drives to be distributed to the first 65 participants, parking passes and even free textbooks; these can be won simply by sending an email with the answer to the questions “What is gerontology?” and “What can gerontology do for you?”.

The more premiere prizes are attached to photo submissions answering the question “What do you picture when you hear the word old?”

Gustafson hopes that the opportunities provided by the gerontology department will draw more attention to their program in a time where it’s “important for you to understand your own generation.”

“We’re living in a global phenomenon,” she emphasized, “where people are living longer than ever before.”